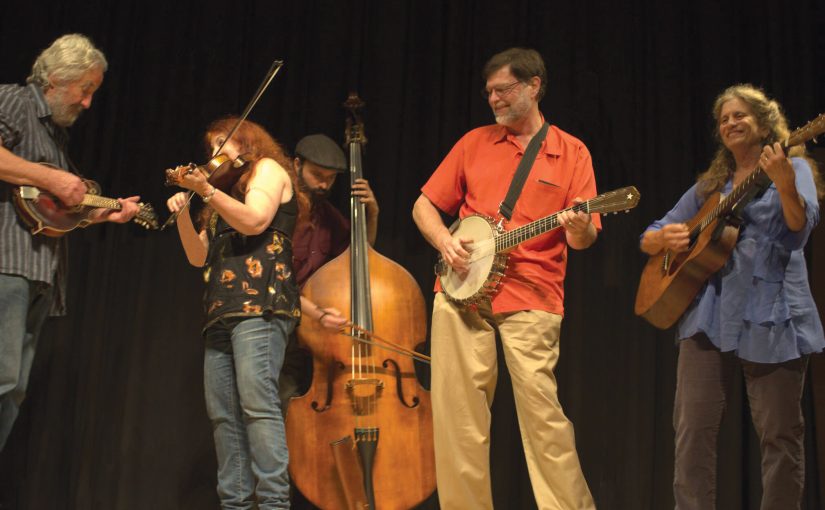 The Todalo Shakers specialize in vintage jug band party  blues, rags and stomps which sound like they are lifted right out of 1928 in Memphis, Tennessee. Complex and soulful vocal arrangements create rich and funky harmonies, and a great feeling of camaraderie; the exuberance and fondness that the musicians feel for their material and for each other is unmistakable. Mix in hot ragtime tunes on fiddle and mandolin plus virtuoso bass slap solos, and the party really gets going!

Suzy Thompson has long been known for her bluesy fiddling and powerful vocals; she is the fiddler of choice for Jim Kweskin & Geoff Muldaur; Del Rey, and has also worked with Maria Muldaur, Dave Alvin and Peter Rowan. Eric Thompson (playing mostly mandolin in the Todalo Shakers) began exploring the country blues in the 1960s with Mother McCree’s Uptown Jug Champions (with Jerry Garcia) and more recently in his work with such artists as David Nelson, David Grisman and Jody Stecher. The Thompsons are based in Berkeley, California.   Guitarist/vocalist Frannie Leopold (Mendocino) has toured and recorded the Delta Sisters and the Balkan Kafe Orchestra, and is a perennial favorite instructor at many West Coast music camps including Lark in the Morning and California Coast Music Camp. Bruce “WB” Reid (Seattle) sings and plays a rare vintage 6-string banjo-guitar (affectionately known as “the enforcer”) with the Todalo Shakers. WB spent part of his twenties hanging out in San Diego with bluesman Sam Chatmon, of the legendary string band the Mississippi Sheiks. He has toured and recorded with the Tallboys, with the Carolina Jug Stompers and with his wife, Bonnie Zahnow. Upright bassist Matt Weiner (Seattle) boasts a distinguished resume including stints with the Asylum Street Spankers, Hot Club of Cowtown, Wayne Horvitz, Danny Barnes and Becky Kilgore. His slap bass solos are always a highlight of a Todalo Shakers performance!

“A killer set of blues, rags, slow drags, early swing and jug bandfavorites…they sure know how to shake it up!”   Old Time Herald