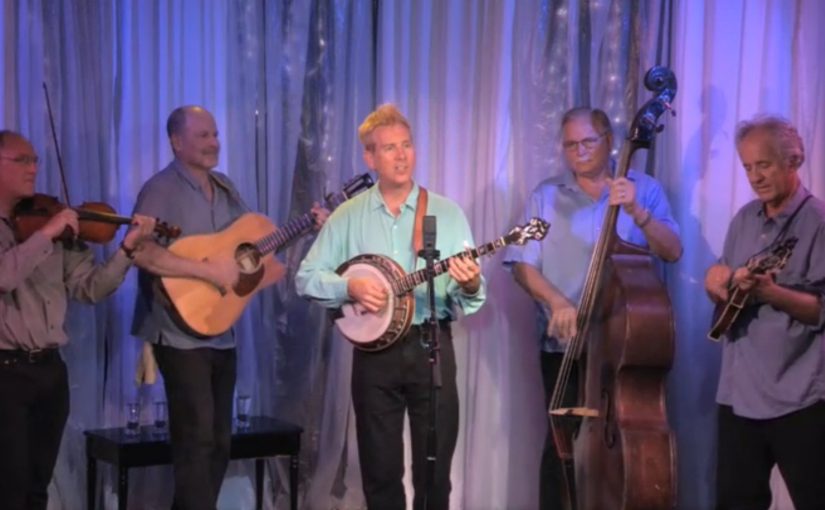 In 2003, veteran bluegrassers and recording artists Terry Enyeart, Dave Keenan, Don Share, Tom Moran and Paul Elliott, came together in a match made in musical heaven. Take three-part harmonies that send shivers up your spine, add dazzling instrumental firepower, and you have the sound of the DownTown Mountain Boys. On Saturday, February 17, 2018 they celebrate the release of their third album, Hey John, with the Seattle Folklore Society.
To begin with, each of the band members should be considered a master of his instrument. Each player – Paul Elliott on fiddle, Don Share on guitar, Terry Enyeart on bass, David Keenan on banjo and Tom Moran on mandolin – has the chops to fit easily with any band performing today, and most importantly they all have a great sense of how to play something that fits the tune or song perfectly. Share, Enyeart and Keenan share lead and tight three-part harmony throughout.
The DownTown Mountain Boys bring their musical expertise and excitement to traditional and familiar songs and tunes and they each have penned engaging original songs and instrumentals.
“Whether they’re performing a Flatt and Scruggs classic like “Till The End of The World Rolls Round”, a swinging vintage honky-tonker like “Smooth Sailin”, or a hot new original, the DownTown Mountain Boys are a true-blue bluegrass band.” Doug Bright, Heritage Music Review.

Join the DownTown Mountain Boys at the Phinney Neighborhood Center on Saturday, February 17, 2018, to celebrate the release of their new recording.