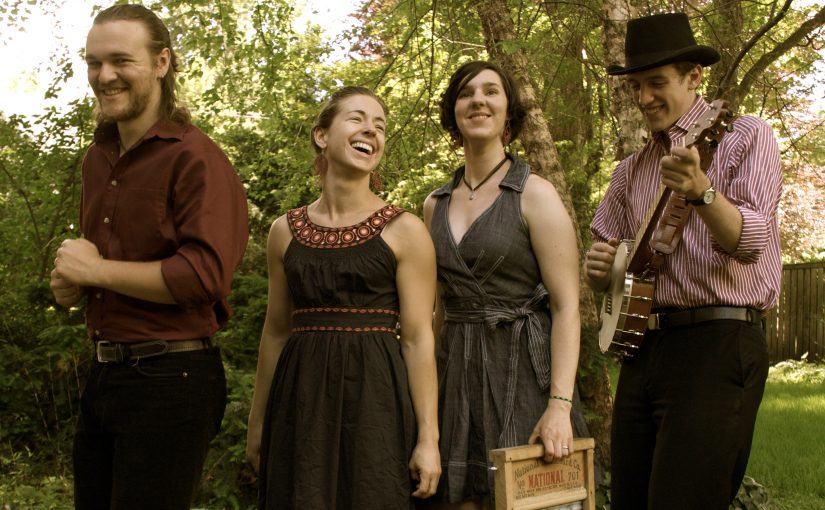 Specializing in close harmony singing, this New England quartet has sought out living masters of traditional US singing styles and other styles around the world, to develop a deep connection to their songs and to the people they come from.

The result is engaging performances, filled with vibrant energy, beautiful, close harmonies, and maybe some banjo and percussion to round it all out!

Their latest album, “Songs On The Times: A Songbook & Album for Social Action“, highlights the important role that music has played in political and social movements over the past 400 years and is designed to be used in present and future movements.

Windborne will also present a singers’ workshop on the afternoon of their SFS concert, 1-3PM at the Home Street Bank, Community Room 7307 Greenwood Ave N. Seattle, WA 98103.
Vermont-based quartet Windborne is known for connecting audiences with the history and musical background of their songs. At this workshop they’ll delve even deeper! This workshop will have a dual theme – They will concentrate both on songs of labor and social movements that they researched for the 2017 book and CD “Songs On The Times”, AND they will also concentrate on songs from much different musical cultures, such as the Republic of Georgia, Basque Country, Bulgaria, Lithuania, and maybe even Quebec .

Whether or not you plan to attend their evening concert at the Phinney Neighborhood Center, this workshop is an excellent chance to hear them sing and talk about the source-singers they’ve learned from, all in an intimate setting (space for approximately 30 people to attend).

This is not a ticketed event. Seats will be filled on a first come first served basis.