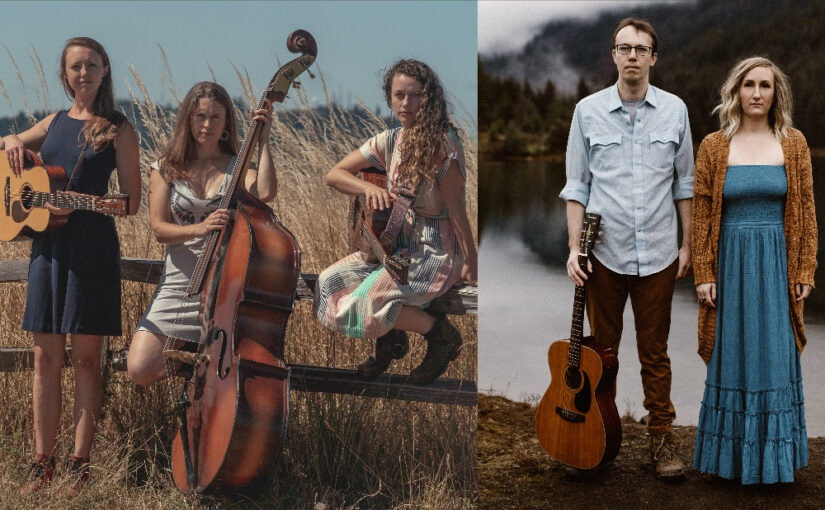 (Update – Tickets WILL be available at the door $24/$22/$10 payable by cash or check. The hall opens at 7) The in-person concert starts at 7:30pm, Saturday April 23rd ending at approximately 10pm. The online concert will be available until Tuesday night April 26th. Once you begin viewing you will have 24 hours to complete viewing or rewatch the online concert.

One’s a classically-trained soprano and distinguished choral conductor. The other’s an award-winning songwriter and tireless presence on Seattle’s live-music scene. Both are in-demand session-musicians, though with very different credits. Together, Wes Weddell & Ailisa Newhall bring a shared passion for craft and community to an original duo project that combines two complementary arsenals of skill and experience.

Longtime friends, the pair have teamed for years to teach a songwriting unit in Newhall’s public school choir classes, culminating in a week-long studio session where students record their work with Weddell and Newhall accompanying. Over time they began to wonder what they’d sound like playing behind their own compositions, and the two began collaborating as songwriters. The result is Pushing Forward, an album of engaging narrative songs that delivers true dual-lead vocal arrangements supported by nuanced instrumental excellence.

We are so excited to bring the lovely harmonies and beautiful songwriting of Wes & Ailisa to the SFS stage!

Harmony-driven folk band from Portland, OR

Mix three singer-songwriters, several stringed instruments, and a variety of percussive techniques, and you get Five Letter Word. This Portland, OR-based trio of powerful women includes Leigh Jones (guitar, percussion), Megan Alder (guitar) and Audra Nemir (bass), blending their signature harmonies into songs from folk to bluegrass to blues and beyond. Winners of the 2018 Northwest String Summit Band Competition, Five Letter Word takes inspiration from the harmonic tradition of groups like the Wailin’ Jennys, Dixie Chicks, and The Wood Brothers, and add their own special flair to create a sound that is “uniquely infectious” and a show that is “delightful, with a few unexpected twists.”

After growing up steeped in musical theater in North Carolina, Leigh Jones earned a Drama degree from New York University’s Tisch School of the Arts, then spent several years in the NYC music scene before moving to Portland in 2014. She has toured across the US and abroad, and in the fall of 2012 she released her debut LP, Worth Wild, which showcases the intersection of her theater background and southern roots. With an unforgettable voice that has been compared to Dolly Parton and Alison Krauss, Leigh’s musical performances show remarkable versatility as she bounces between stringed and percussive instruments, occasionally leaning on her dance background to round out the show, and always lending her clear voice to the melodies and harmonies that form the backbone of the band’s sound.
Megan Alder hails from Gettysburg, PA where she grew up singing and performing. At 16, she picked up guitar and began writing songs. She is known for her adeptness as a flat-picker, her powerful voice, and her ability to write songs that capture the wide range of human emotion. Now based in the Columbia River Gorge, Megan can most often be found on the stage or in the woods. Her debut EP, Quittin’ Time, came out in 2020.
Audra Nemir’s musical journey started with piano, which she played in her high school’s jazz band, and choral singing. Several bands and a cappella groups later, she discovered a passion for thumping low notes, and took up the upright bass in 2012. Since then, Audra has played in a number of Americana bands, where her energetic stage presence rarely goes unnoticed. Audra’s songwriting reflects her mixed musical background, with emphasis on multipart harmonies and instrumentation.

The in-person concert starts at 7:30pm, Saturday April 23rd ending at approximately 10pm. The online concert will be available until Tuesday night April 26th. Once you begin viewing you will have 24 hours to complete viewing or rewatch the online concert. (We are confirming the availability of  a streaming tech before offering online tickets for sale – check back soon!)