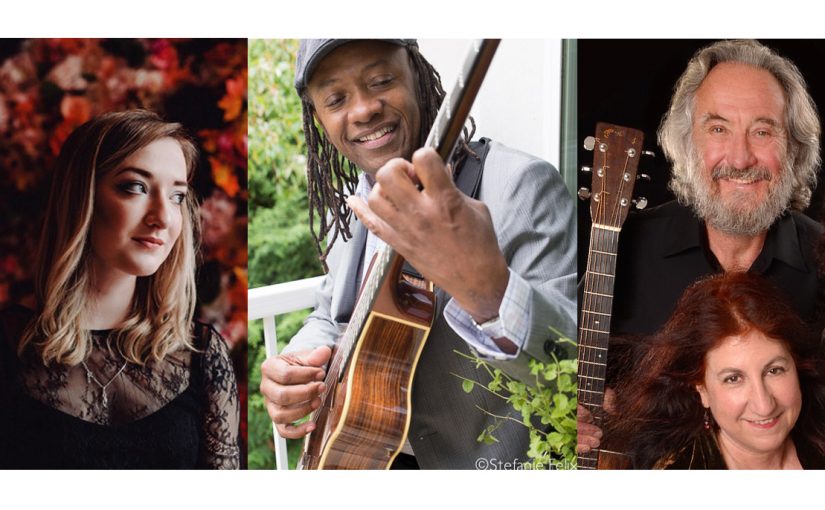 Seattle audiences, we have missed you in this time of the pandemic! We miss sharing our favorite music with you, and we miss being able to support the working artists that give us all so much. Please join us for our first Virtual Showcase, featuring three varied artists that we would otherwise have presented on our concerthall stage. Each performer will a 30-40 set . Folk DJ Richard Gillmann will be the MC for the evening.
This is a ticketed event. We are working with Konnect Club to present the concert. Please go to their site to purchase your ticket. You will receive a link to view the concert on the day of show, which will be good for a 24 hour period. (til 7pm Sunday,  if you are not able to join during the livestream)
Purchase Tickets here  The regular price for a household is $20, with options $10 if need dictates, or more if you are able to add support. All net sales will go to the artists for this show.

Eduardo Mendonça: A Touch of Brazilian Folklore –  traditional, popular, and his own compositions interpreted on voice, guitar, and  percussion.
A native of Salvador, Bahia, Eduardo has played, composed, and directed various genres of Brazilian popular music in the US, Canada, Nepal and Brazil since 1974. He has shared international stages with legendary Brazilian musicians Geraldo Azevedo, Alcione, and Jorge Ben Jor, as well as opening for such renowned musicians as Guilherme Arantes and Ana Carolina. Eduardo has performed for many notable personalities, including the 14th Dalai Lama, Pope John Paul II, and former South Africa President Nelson Mandela, and was featured in the PBS American Masters documentary, Paul Simon: Born at the Right Time. In May 2016, Eduardo performed as a guest artist with the jointly sponsored Seattle Symphony-Carnegie Hall project “Link Up: The Orchestra Moves,” exploring the creative process of this passionate composer through melody and motif.
Eduardo brings a wealth of experience to his wide-ranging musical endeavors. The variety of musical fusions present throughout and between the Americas can be found on his five CDs: “Steps” (2016), “Brazil and Me” (2009), Dois em 1” (2009), “Brazil in Washington” (2003), and “Show Brazil” (1997), where his talents as a performer (guitar, vocals, and percussion), composer, and arranger shine.
In addition to providing a pleasurable musical experience, his performances never fail to enlighten and entertain multi-generational audiences about music theory, history, and investigation.

“Seattle is lucky to have Mendonça in the neighborhood” Paul de Barros – The Seattle Times.

Aberdeenshire folksinger, Iona Fyfe, has become one of Scotland’s finest young ballad singers, rooted deeply in the singing traditions of the North East of Scotland.  Winner of Scots Singer of the Year at the MG ALBA Scots Trad Music Awards 2018, Iona has been described as “one of the best Scotland has to offer.”  (Global-Music.de).  With a number of high profile appearances under her belt, Iona has performed extensively in the UK, Germany, Czech Republic, Austria, Italy, Switzerland, France, Poland, Australia and Canada.  In 2018, Iona performed at Interceltique Festival De Lorient where she was described as “a Scottish folksinger, magical and charismatic” (Rolling Stone, France).

Iona was nominated for Folk Band of the Year and Young Scots Speaker of the Year,  at the MG ALBA Scots Trad Music Awards and Scots Language Awards respectively, in 2019, and was a finalist in the BBC Radio Scotland Young Traditional Musician of the Year for 2019 and 2021. She also won Scots Performer of the Year at the Scots Language Awards 2020.  Iona studied at the prestigious Royal Conservatoire of Scotland and graduated with a first class honours degree in Traditional Music and holds an FLCM in Scottish Traditional Voice from London College of Music, plus sits on the boards of several Folk Music organizations.

“A major young voice in the continuous skein of the ballad tradition. Iona is a folksinger’s delight; the tradition needs more people like Iona” – Nicky Rossiter, Irish Music Magazine

Eric & Suzy Thompson – Southern roots music: blues, Cajun, rags, fiddle tunes and more for your listening and dancing pleasure! A powerhouse duo of traditional music, Berkeley’s Eric & Suzy Thompson have devoted their lives to the pursuit of weird and obscure old-time American music – warped fiddle tunes in odd tunings, cinematic ballads, country blues songs that contain mysterious metaphors, early Cajun music with incomprehensible French lyrics and backwards chords. They have been making music together for 45 years and it shows, in the seamless communication, in the virtuosity  and raw power of their musicianship and in the breadth of their enormous repertoire. Using fiddle, mandolin, guitar and their voices, they transport the sounds of an earlier era right into the present day and continue to unearth and learn new repertoire from previous generations. Eric’s flatpicking on guitar and mandolin is exceptional for its purity of tone, speed, and soulfulness; Suzy is a powerful singer, an award-winning fiddler and Cajun accordion player.