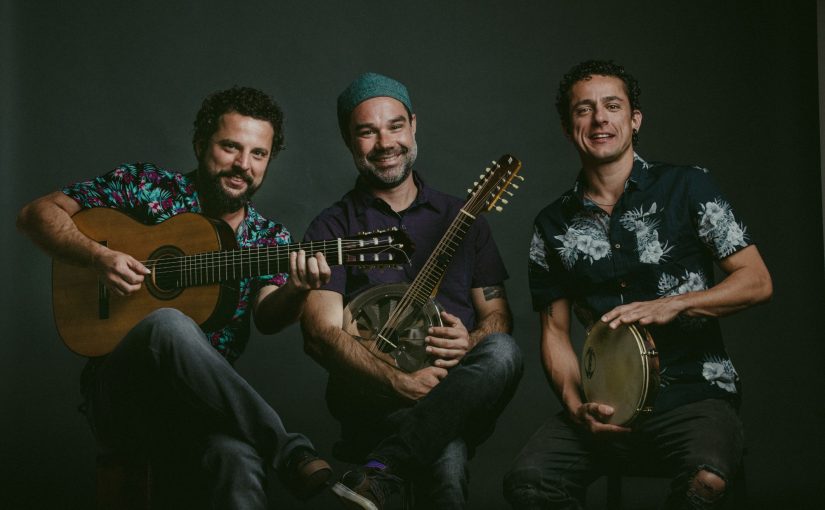 We regret that Trio Brasiliero is not able to perform on this date.  We hope to reschedule the group for a future season

Coming out of the deep connection between the members of Trio Brasileiro, the music they create has a magical quality that led to their CD Rosa dos Ventos (Windrose) being nominated in 2018 for the Grammy Best World Music Album and named one of the top twenty jazz recordings of the year in the Downbeat Magazine Readers’ Poll. Their bonds are both by blood, between brothers Douglas (seven-string guitar) and Alexandre Lora (percussion) playing music together since childhood, and by friendship, finding a musical soulmate in bandolim-player Dudu Maia. Their annual retreats to the river shore in Caraiva fostered both the band Caraivana and the enduring ties that form the heart of Trio Brasileiro.

Each of them has also delved into their instrument’s technique and traditions, and into the musical language of Brazilian choro with its sublime blend of African rhythm and European classical influences which after 150 years “remains one of Brazil’s most popular music styles,” says cultural historian Bruno Carvalho. Playing both traditional choro and their own compositions, they were recently featured performers at Wintergrass 2020, and are locally renowned for their sold-out faculty concerts at Centrum in Port Townsend.

To choro’s rich mixture, the three add the expressive melding of a long-time ensemble and radiate their combined creativity. It is a very special event to witness this magic of their deep connection.

“The percussion and strings … com[e] together to develop a deep groove … lightning fast collective improvisation … [and] an exciting rhythmic basis for the music that is thrilling to hear.”
—– Tim Niland, Music and More.

BAND MEMBERS:
Douglas Lora
Composer and guitarist Douglas Lora moves with versatility between classical and popular music, and has been part of the Brasil Guitar Duo (with Joao Luiz) for more than fifteen years, and seven-string guitarist of the choro and samba band Caraivana, Douglas has a full touring schedule worldwide, and has collaborated with artists including Paquito d’Rivera, Marco Pereira, Jovino Santos Neto, Ney Rosauro, Marina Piccinini, and many others. Lora has performed as a soloist with the Dallas Symphony, Houston Symphony, Dayton Philharmonic, Orquesta Metropolitana of Sao Paolo, and the Orchestra of the Americas. Lora was a winner of the Concerts Artists Guild Award in 2006 with the Brasil Guitar Duo, and has eight recordings and five original film soundtracks to his credit.

Dudu Maia
Dudu Maia served for five years as the bandolim (Portuguese for mandolin) professor of Brazil’s most respected Choro school, the Escola Brasileira de Choro Raphael Rabello. He is the co-author of the pioneering Choro Handbook alongside guitarist Henrique Neto. Dudu taught for four consecutive years at David Grisman’s and Mike Marshall’s Mandolin Symposium in Santa Cruz, California and now leads Centrum Foundation’s Annual Choro Workshop in Port Townsend, WA since 2011. He is also an experienced music producer and has recorded and produced many artists besides writing original film soundtracks.

Alexandre Lora
Alexandre Lora moves easily within different styles of Brazilian popular music and World music, performing as a percussionist and Hand Pan/Pantam soloist. Lora achieved his Master’s degree in Musicology and Music Education in 2009 and has worked as a teacher along renowned artists, such as Adrian J Portia, Carlos Kabec Rodrigues, Jeremy Natthag, Claudiu Lazarciuc and Florian Betz.
In 2011, as member as the XLJazz Orchestra, he had performed in Amsterdam and Rotterdam along the great piano player Ramon Valle, and has performed as well with Anat Cohen, Jovino Santos Neto, Mestrinho, Ramon Valle, Mariana Aydar, and Brazil Guitar Duo. In 2015 he has released his first all-original solo CD, Oriente His second solo CD Hand Pan for Peace was released in July 2017.

Door open at 6:30 for the 7PM concert. Remaining tickets will be available at the door ($2 more for adults, payable by cash or check).