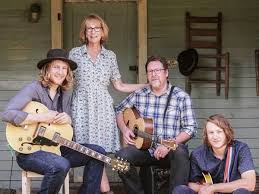 Tickets will be available at the door for tonight’s concert, payable by check or cash only (Advance tickets on-line until 12:30)
Tim Grimm has been a returning favorite with the Seattle Folklore Society, and this time he’s morphed into the Tim Grimm Family band, including his wife and two sons, also accomplished musicians and vocalists.  This will be a fun night of up-tempo Americana and Bluegrass, along with Tim’s great storytelling ballads.

Tim is an award-winning songwriter and a stage, screen and television actor. He now lives with his wife and two sons on an 80-acre farm near where he grew up in Indiana. His songs are full of the rural insights that have shaped his life — rich with descriptive details, sometimes humor, and sung with warmth and intimacy.  His stories telling of how his songs originated are engaging and helpful in really understanding and appreciating his songs.

After college, Grimm pursed an MFA in Theatre at The University of Michigan and from there worked in regional theatre, settling in Chicago. In addition to his theatre work, he studied briefly at the Old Town School of Folk Music and began writing songs and performing. He put together a band, Tim Grimm and The True Hearts, and released two cds. He then had opportunities in Hollywood, and Tim put down his guitar and pen, and didn’t really pick them up for 10 years.

In 2007, Grimm put together a concept cd with several of   the Midwest’s finest songwriter’s– Krista Detor, Carrie Newcomer, Tom Roznowski, and Michael White.  The recording, Wilderness Plots, was drawn from the short stories of noted author, Scott Russell Sanders.  Two Emmy-nominated PBS programs evolved with the music and songs.

Tim performs around the US and Europe. He also hosts small tours for fans to Ireland, Scotland, and the Netherlands, a music series, and theater productions in the Midwest. He’s released 12 cds to critical acclaim, the most recent, A Stranger in This Time, in 2017.  It is the first album that officially includes his wife and two sons as the Tim Grimm Family Band.  They meld their considerable talents on guitar, bass, banjo, and harmonica, along with complementary background vocals for a very satisfying signature sound.

Enjoy a great night of music, storytelling, and stage banter in a casual listening room that seats 150.  Coffee, tea, and light refreshments are available.  Tickets at the door are cash or check.