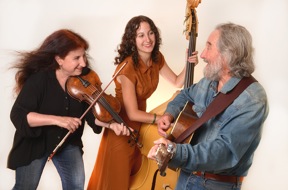 Thompsonia combines Eric & Suzy Thompson’s deep devotion to southern roots music with daughter Allegra’s fresh perspective, creating feel-good music that ricochets between the rowdy and the sentimental, with an abundance of groove and a bit of a quirky edge. Suzy and Allegra’s genetically-matched vocals (dubbed “The Everly Sisters sound” by Geoff Muldaur) are featured, along with stellar lead playing from Eric on mandolin and guitar. In addition to the Cajun, blues and old-time music for which Eric and Suzy have long been acclaimed, the trio also performs witty originals alongside obscurities in styles ranging from rockabilly to hokum to Americana.  Standouts from their new Thompsonia CD include Suzy’s acoustic rock anthem “Very Bad Mood” (guaranteed to have just the opposite effect on the listener), Allegra’s bawdy 1920’s “He May Be Your Dog But He’s Wearing My Collar,” Eric’s proto-zydeco “French Fries” and a lovely duet rendition of Hugh Moffatt’s “Rose of My Heart.” We are so pleased to feature this family trio in an SFS concert!