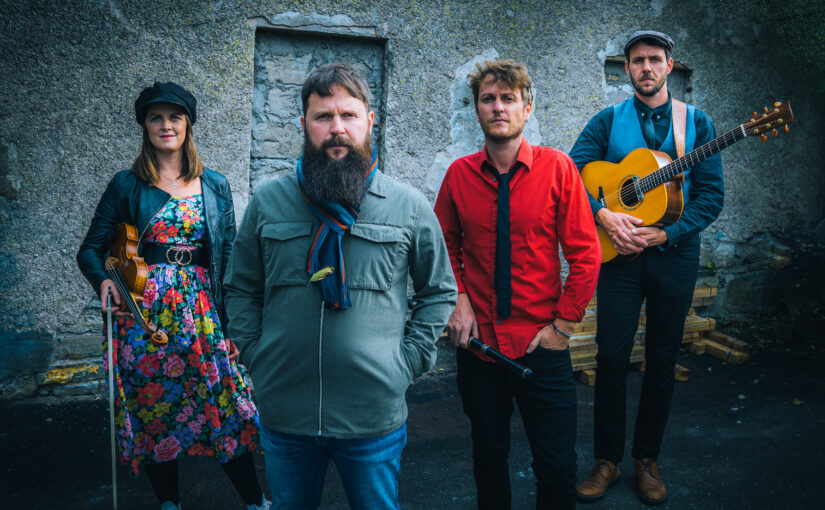 Seattle Folklore Society warmly welcomes The Jeremiahs to our stage. The Jeremiahs is an Irish folk band heralded as a live band not to be missed! They have travelled extensively, bringing their music far and wide. With a wonderful mixture of newly composed songs and tunes in the folk genre and a well selected catalogue of older folk songs, they are sure to rouse all the emotions.

They shape their sound with Dubliner Joe Gibney’s beautiful vocals and whistle;  Julien Bruneteau from Brittany who plays whistle and flute; Dublin based James Ryan who holds down the rhythm section on guitar and bouzouki and a few choice effects pedals; and finally Niamh Varian Barry whose fiddle playing and singing will be familiar to many as she was lead singer with Solas for years.

***This concert and tour would not be possible without the financial support of Culture Ireland.  See below for more information.

From the outset, in 2013, The Jeremiahs grabbed the attention of the heavyweights like Irish Music Magazine whose Sean Laffey says they are “One of the freshest bands in traditional music “and Live Ireland who published “They are the real deal…”

They heralded their arrival and gained immediate recognition by winning the Ballyshannon Folk Festival showcase competition their first year out. Two years later they’ve released their self-titled album which includes the track ‘Forgotten Sons’ that Christy Moore picked as the song that “tickled my ears the most “and won the 2015 TradConnect Songwriters’ Showcase. They recently wowed international audiences at the 2022 Celtic Connections festival in Glasgow.

“Their instrumental work is superior. ..They are the real deal with some really well-done harmonies.” – Live Ireland

The Jeremiahs performing their song The Reluctant Farmer at Celtic Connections 2022 at the Royal Concert Hall, Glasgow

Joe, with his instantly recognisable timbre, offers a diverse repertoire of songs, from rousing sea shanties to emotional traditional songs of hardship, love and loss. A talented Dublin born singer and songwriter with a melting pot of influences.

“The cream of the current crop”   -John Creedon

Former lead singer of American supergroup ‘Solas’ and multi-instrumentalist Niamh Varian-Barry is a musician and composer from Cork City with a unique and individual style. She has a reputation as an exceptional communicator of the arts. Her powerful vocals have been praised world-wide and she is a trained viola and fiddle player, holding a Masters in Music Performance from the Royal Irish Academy of Music.

Dublinese accompanist James has amassed a wealth of experience having already performed in over 14 different countries to date.
James’ draws on a wide a range of influences from different genres and traditions which is evident is his unique percussive backing style. As well as an established teacher James is also an experienced sound engineer having worked with a long list of talented and well-respected musicians and singers in the studio.

Julien hails from Bordeaux in France and began playing the flute at the age of 11. Under the wing and strong influence of great players such as Jean-Michel Veillon and Sylvain Barou, amongst others, Julien’s wonderful style began to really flourish. While studying Jazz music at the Conservatoire of Agen and attending the prestigious Didier Lockwood school in Paris, Julien immersed himself in the works of great artists such as Chris Potter, Stéphane Guillaume and Benoît Sourisse. These factors, combined with the unabating presence in his life of Irish music, have shaped Julien into a flute player of great sensitivity with an amazing ability to improvise.

CJ Alderton, President of the Durango Celtic Festival has this to say about The Jeremiahs:  “We just completed our 7th season and had the great privilege of hosting The Jeremiahs. Having booked such high-flying acts as Solas, Daimh, Runa, Goitse and Old Blind Dogs our audience expects the very best. We got that in abundance with The Jeremiahs. It is one of the best performances I have ever experienced. The musicianship was world-class. The engagement with the audience and their stage presence was flawless. The mix of evocative songs and tunes was as perfect as perfect can be. Along with all of that, these lads were easy-going and cheerful people to be around. The best thing I can say as a festival organizer is that we want them back!”

*** This concert and tour would not be possible without the financial support of Culture Ireland. Culture Ireland promotes Irish arts worldwide. “We create and support opportunities for Irish artists and companies to present and promote their work at strategic international festivals and venues. We develop platforms to present outstanding Irish work to international audiences, through showcases at key global arts events, including the Edinburgh Festivals and the Venice Biennales.”

The band has graced many stages during successful tours in countries such as Ireland, Russia, Germany, Denmark, England and Scotland. Get your Irish on and make sure you see their concert at Seattle Folklore!