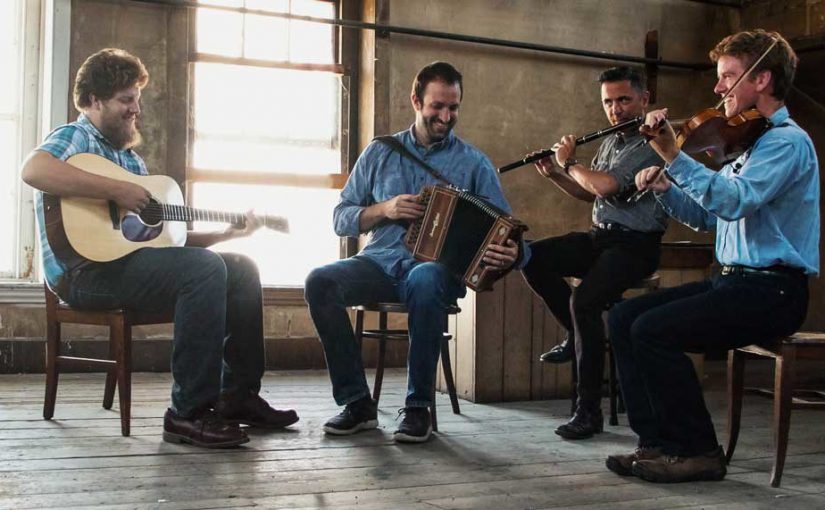 A bold new sound has emerged in New England’s traditional music scene: The Press Gang fuses the talents of squeezebox player Christian Junior Stevens, fiddler Alden Robinson, flute-player and vocalist Hanz Araki, and guitarist Owen Marshall into a high-octane musical partnership. The quartet blends their skill and fluency in traditional Irish music with their curiosity and aptitude for other styles. The joy that these musicians pour into playing music together is unmistakable and infectious. The result is a unique sound; at once energetic and sensitive, innovative and reverent.

About the band:
Christian Junior Stevens has become an influential member of the Irish Traditional Music community in America; particularly in New England where his proficiency at such a young age on both concertina and accordion was nothing short of phenomenal. Gracing stages across the country with some of the most talented artists in the world, he is an in-demand performer and teacher with an intensely dedicated following.

Alden Robinson learned the fiddle as a child in coastal Maine, and furthered his education in traditional music at University College, Co. Cork in Ireland. Over the past few years, he has become a staple of the traditional music scene in New England. Alden continues to travel throughout the U.S. and Ireland to expand his repertoire.

Multi-instrumentalist Owen Marshall is one of the most highly sought-after accompanist in the United States. With his unique sense of harmony and rhythm, he has traveled and performed all over the world with many of the top acts in traditional music. A demanding schedule doesn’t interfere with his pursuit of new and innovative sounds as a bedrock accompanist with a style that never grows stale.

Once called a quintessential world-music musician, award-winning singer and flute player Hanz Araki has been a prominent figure in the Irish music community in North America and beyond for more than 2 decades. In that time he has released 11 albums, played countless festival stages, toured nationally and internationally, and collaborated with a number of well respected musicians within and outside of the Celtic music genre.

We are happy to welcome the quartet to the SFS stage for a fine night of Irish tunes and songs!