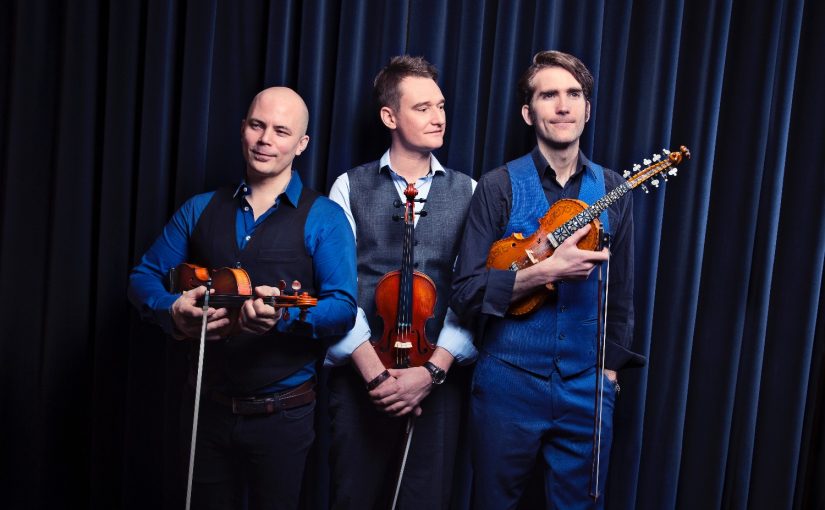 Note – Saturday’s concert is now sold out! There is a very small chance of a few tickets being released at the door. Tickets may not be made available until about 15 minutes after the show begins so you would need to be patient and wait. Tickets at the door ($20 general/$18 SFS, Skandia or PNA member, student, or senior 65+/$9 Youth age 6-17) payable by cash or check. Thanks for your understanding, and the support of  the musicians.
Seattle Folklore Society and Skandia Folkdance Society welcome back this wildly popular band of master Nordic musicians, a fiddle trio from Norway, Sweden and the Shetland Islands who have gained a reputation for their gripping and unique blend of fiddle music since 2009.

Performing together as the The Nordic Fiddlers Bloc, Olav Luksengård Mjelva (Norway), Anders Hall (Sweden) and Kevin Henderson (Shetland Islands), each leaders of their respective traditions, have found themselves in great demand throughout the world.  They have developed a sound that has been described as “unique”, “meaningful”, “intense” and “invigorating”.  Their clever layering of harmony, rhythm, riffs and bass lines creates a sound that leaves the listener enthralled but at the same time dumbfounded that the sound only comes from three fiddles.

The familiar fiddle and viola are augmented by the octave fiddle and ornate hardanger fiddle in an innovative show case demonstrating the versatility of all three traditions and the musicians skills. – Euphemia Matheson  www.orkneynewstoday.co.uk (Gable End Theatre, Orkney)

“I surrender unconditionally to these master musicians. The worn concept of tradition and innovation have rarely been used as smart as this” – LIRA

Kevin Henderson comes from the Shetland Islands, one of Scotland’s archipelagos with one of the richest fiddle traditions in the world.  He is regarded as one of Shetlands finest fiddle players and is in hot demand playing with some of the best known groups and musicians in the folk music scene.
He began playing the fiddle at the age of 9 taking private lessons with highly renowned Shetland fiddler Trevor Hunter and at the age of 10 studied under the late great Willie Hunter, arguably Shetlands finest ever fiddler.
Kevin has toured extensively throughout the world and he has performed on TV and radio programs all over the globe and has featured on many albums over the years.

Olav Luksengård Mjelva comes from Røros in the Sør-Trøndelag region of Norway.  He began playing the fiddle at age seven and some years later started playing the Hardanger fiddle.
In 2010 Olav received the prestigious Spelemannprisen, the Norwegian equivalent of a Grammy award for his debut solo album and in 2011 he received the prize as part of the Unni Boksasp Ensemble. In 2013 he was also awarded the title of Norways folk musician of the year.
Olav is highly sought after as a studio musician and has played on over 50 releases. He is also a widely used instructor and dance musician both in Norway and abroad.

Anders Hall comes from Arbrå, Hälsingland in Sweden.  He plays the fiddle, viola and also the Hardanger fiddle, an instrument he studied at the Ole Bull Academy in Voss, Norway from 2006-2008.
He has established himself as a creative and gifted musician on the Nordic folk music scene and has an ability to reach the listener, fitting together old traditions with innovative ideas and expressions.

The absolute stars of the night for me were penultimate act, the sharply dressed Nordic Fiddlers Bloc. …Their outstanding musicianship was interspersed with some first class craic from (the) band members. It turns out the constant ribbing the Swedes and Norwegians give each other isn’t soothed by the addition of a Shetlander.

The trio allow for some sublime quiet moments only to build the music to an emotive high again and again, winding harmonies through the melody in an almost classical style. The unmistakable Scandinavian sound with its unexpected minors and almost mischievous rhythms.”
Louise Thomason – The Shetland Times (Shetland Folk Festival 2014 Review)

To date their music has taken The Nordic Fiddlers Bloc to the USA, Canada, the UK, Ireland and across mainland Europe captivating audiences along the way. 2016 saw the release of their eagerly awaited second album, “Deliverance”, the follow up to their debut album released in September 2011 to great critical acclaim.

Join us for what is to be sure an enthralling performance of masterful and innovative Nordic traditional music!