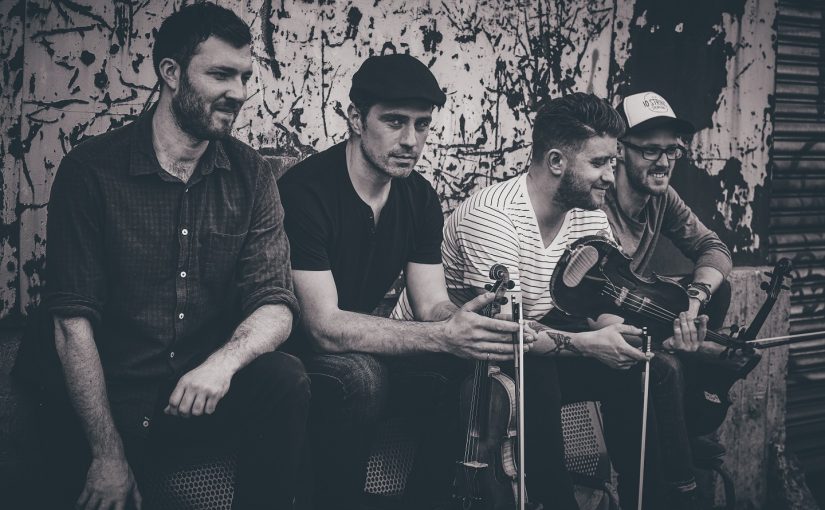 (Update – advance tickets will be available on-line until 12:30, and then at the door for $2 more, cash or check only) The Fretless is quickly gaining high acclaim around the world and is an innovation in folk music that must be heard! This young band is taking string music to fascinating places as it transforms Celtic fiddle tunes, folk melodies and chamber music into intricate and beautiful arrangements. They harbor all the energy of fiddle tunes, while shattering all expectations in writing, creativity and performance. They may look like a string quartet, but with progressive arrangements and roots deeply based in Celtic and Canadian fiddle styles, The Fretless is creating their own distinctive path in the music world.

It’s not uncommon for a modern string quartet to play some crossover material, but what The Fretless does is different. They arent a classical quartet playing arrangements of folk tunes, but a folk band with a twist! Playing the instruments of a classical string quartet, the members of The Fretless are fundamentally folk musicians, who know the traditions and styles, but also happen to have extensive technical training and chamber music experience.

With the release of their debut album Waterbound in early 2012, which features their fresh styles, compositions, as well as collaborations with singers Ruth Moody and Norah Rendell, the quartet grabbed the attention of critics and fans across many genres.  This recording fueled a busy summer of festivals across Canada, a month long tour of Germany in the fall, and world-wide sales and radio play. The year was capped with 3 awards, bringing the album, and the band further into the public eye; Instrumental Album of the Year at the Western Canadian Music Awards, and at the Canadian Folk Music Awards, the Fretless walked away with both Ensemble of the year, and Instrumental Group of the Year.

Their second album, The Fretless, a completely instrumental album, was also greeted with acclaim and was awarded the 2014 CFMA Ensemble of the Year and 2014 WCMA Instrumental Album of the Year. Their next album, Birds Nest won the Juno award for Best Instrumental album of the year.  In 2018 they released Live From the Art Farm to great acclaim and have also been very popular at music festivals around the world, including the Shetland Folk Festival.

The Fretless sound is the product of brilliant musicians and composers, cross-genre influences in a modern world. The outcome is a unique voice that is rich, fresh and diverse. Folk and Roots Music Webzine/ http://www.folkradio.co.uk