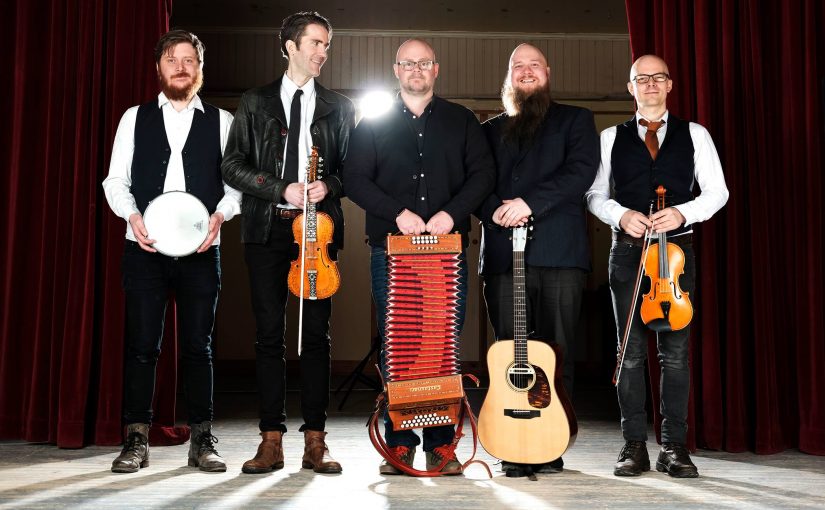 (Please note – There will be some tickets available at the door tonight, $22/$20/$10 payable by cash or check) They’re back! SVER, the Epic Nordic Folk band, will be back in concert at Seattle Folklore Society! Co-sponsored by Skandia Folkdance Society, SVER has its own take on traditional Norwegian folk music. They play original compositions as well as traditional tunes with fantastic, fresh arrangements, all rooted in the folk tradition. SVERs energy and magnetic spirit will draw you in to experience the joy of their music.

SVER has an enviable reputation for being one of the best live bands on the circuit. Fiona Talkington, Songlines

A new CD is in the works, which will be a much-anticipated sequel to their third album, Fryd. SVER has put on countless performances since 2008 at festivals and clubs all over Europe. The last four years SVER has collaborated with the Swedish dance-hall artist Snakka San, and created the new genre Folkhall, playing in Scandinavia. Theyve also had multiple songs on the radio charts in Norway and Sweden.

The album Fryd from SVER mixes music from the depths of heritage with the freedoms of innovation. Youre unlikely to resist, so why try, just go with it. – Tim Carroll, Folkwords

Olav and Leif Ingvar have played together since 2002. In 2010 Olav received the prestigious Spelemannprisen, the Norwegian equivalent of a Grammy award for his debut solo album, and in 2011 he received the prize as part of the Unni Boksasp Ensemble. In 2013 he was also awarded the title of Norways folk musician of the year. Olav is highly sought after as a studio musician and has played on over 40 releases. He is also a widely used instructor and dance musician both in Norway and abroad.

The music paints some wonderful pictures whilst defying you not to get up and dance. Dave Chamberlain, FATEA.

Join us for an evening of engaging and energetic Scandinavian music!