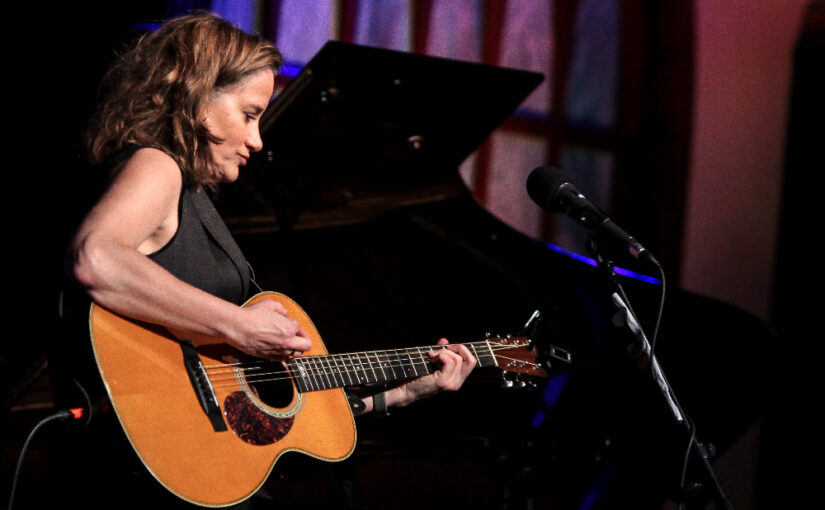 (The in-person concert takes place on Saturday June 4th, starting at 7:30pm. Online viewing tickets will also be available for this show, with viewing allowed until 7pm Tuesday, June 7th. Once viewing has begun, it is possible to continue or re-watch for a 24 hour period within this time)
Songwriter Susan Werner has built a reputation coast to coast as one of the most daring musical forces on the acoustic circuit.  With professional jazz, rock and classical chops on piano, guitar and vocals, her songs and shows explore a dizzying array of styles and themes in concept albums ranging from Cuban Son (An American In Havana), to New Orleans junk piano (NoLa), a celebration and critique of the American church (The Gospel Truth), and new “Great American Songbook” style standards (I Can’t Be New).   Werner has toured with luminaries such as Richard Thompson, Joan Armatrading, Keb Mo and George Carlin, and her performances are renowned for their intensity, spontaneity and humor.  Her score for composer and lyricist of the score for Bull Durham, The Musical, based on the MGM film (Alliance Theater, Atlanta) was praised by the New York Times and the Atlanta Journal Constitution.
Her latest full length recording (Flyover Country) is a collection of 10 originals in
traditional country and bluegrass song forms and features Werner’s signature blend of musicality, poetry and wit. Her latest EP, a recording of original songs, The Birds of Florida, is currently available for purchase at susanwerner.com as well as on spotify, you tube, apple music , pandora, and itunes.

We are very excited to feature Susan in a special concert on Saturday June 4th in the Phinney Center Community Hall. The concert will be presented in one long (75 – 90 minute) set.

“When it comes to crafting a song, Ms. Werner’s only peers are Jimmy Webb and Paul Simon.”  -No Depression

“Susan Werner, a clever songwriter and an engaging performer, brings literacy and wit back to popular song.”  -The New Yorker