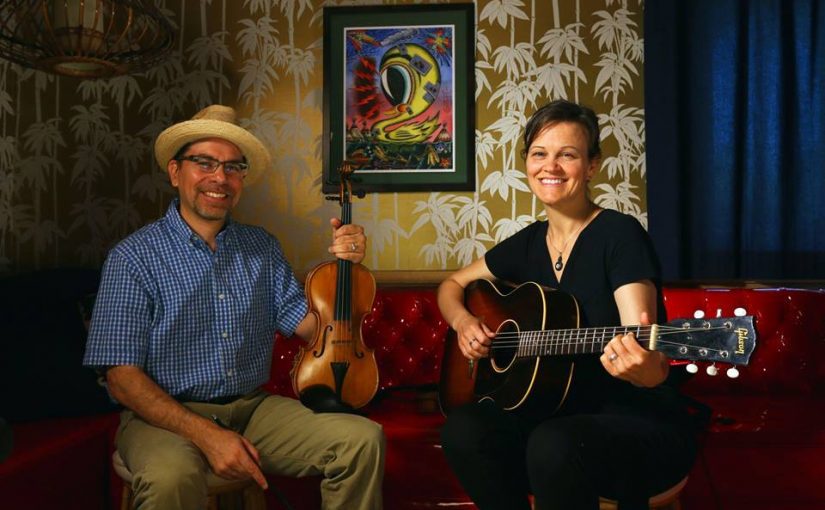 SFS is delighted to bring the twin fiddle harmony and unique old-time  repertoire of Spencer & Rains to our stage.

Tricia Spencer  is a Kansas fiddler who grew up learning the tradition of old time music from her Grandparents.  At an early age, she was perched up on some stage tapping her foot to the beat of fiddles, banjos, mandolins and guitars.  While growing up, her free time was spent traveling to festivals and fiddling contests throughout the Midwest where she learned from the likes of Pete McMahan, Cyril Stinnet, Lyman Enloe, Dwight Lamb, Amos Chase, and Lucy Pierce. Tricia is multi-instrumentalist who has studied with some of the great masters and is highly sought after as a performer, dance fiddler, and instructor.

?Howard Rains is a native Texas artist and the fourth generation to play on his fiddle. He comes from a musical and artistic family and his two obsessions are painting and playing the archaic style of fiddling of his home state. Howard plays rare, old tunes learned from friends, family, mentors, and old recordings. As much known for his painting as his fiddling, Howard has painted many of the great old time musicians, both living and gone.

Together, Spencer & Rains have performed and taught nationally and internationally, preserving and building upon the traditions of their region. The husband and wife duo are known for their twin fiddle harmony, which is a product of the influence of midwestern Scandinavian fiddlers Tricia heard as a child.  At the same time, Howard’s distinct repertoire reintroduces listeners to the pre-contest styles of Texas fiddling. That same sense of harmony is in their vocals, as well, which they pull from all manner of American folk music. Both multi-instrumentalists, they are steeped in tradition and are dedicated to the preservation, performance, and teaching of old time music.

“These two fiddlers have found their groove and it is rich.”

Howard and Tricia’s recordings can be found on the Old Time Tiki Parlour label where Howard also works as chief graphic designer and Tricia does hand lettering.