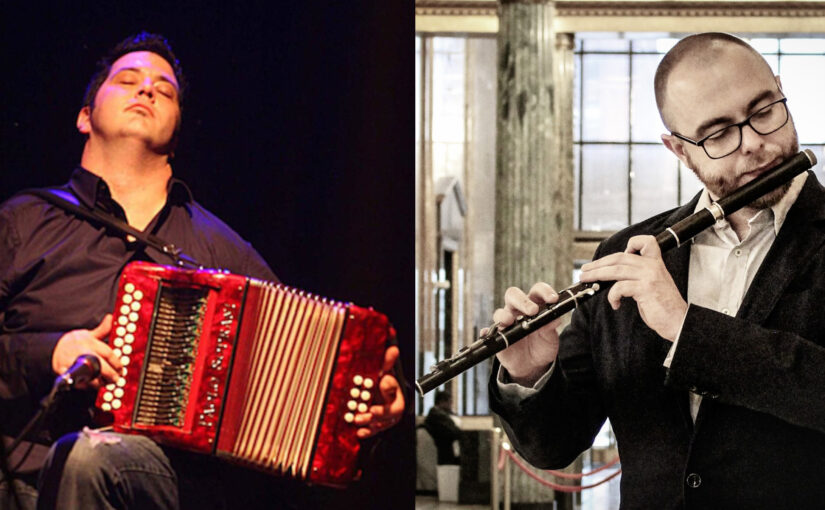 One more update: Advance ticket sales have now cut off. It looks like we have 12 tickets that will be available at the door. (Konnectclub always says “sold out” instead of “sales ended”) Door prices are $24/$22 student, senior 65+, or member of SFS or the Phinney Neighborhood Association, still only $10 for youth up to age 17, payable by cash or check. We will also be able to take credit cards tonight, with a $1 per ticket service charge. Doors open at 7 – See you later on for a great night of music!

Late Breaking News: We just received word that Johnny B Connolly is unable to do this tour, but fortuanately Colm Gannon, one of the very best box players out there today, has agreed to fill in. We’re told “Colm will knock your socks off, I promise! We are confident that this will be a great concert, Sean & Colm toured together last year and are well prepared.”

Seán Gavin, is one of the most highly regarded Irish musicians of his generation. Master uilleann piper and flute player, he is the first and only musician born outside Ireland to win the prestigious Seán Ó Riada Gold Medal.  His most recent recording, Music from the Lost Continent, with fiddler Jesse Smith, accompanist John Blake, and bodhran player Johnny “Ringo” McDonagh, was hailed by The Irish Echo as “traditional music at its best!”

He has toured regularly with Téada, as well as solo and other projects. Seán was Musical Director for the PBS program “I Am Ireland”, and for the long running Atlantic Steps. He has lectured on traditional music at the University of Chicago, St. Andrew’s in Scotland, and many other locations.  He is now back in his native Detroit where he continues to play, teach, and promote traditional Irish music. www.SeanGavinMusic.com

Accordion wizard Colm Gannon’s playing is as vibrant and beautiful as the Connemara hills. Born in Boston of Connemara parents, he learned his music from his father and brother Sean. As a youth he played regularly with Seamus Connolly, Tina Lech and Jesse Smith. Colm won the All Ireland on the button accordion in 1994, has toured widely with Riverdance, Dervish, and DeDannan and even performed with Dolly Parton. He has many recordings to his credit, and is widely recognized as one of the young masters of the tradition. Colm has studied and lectured on the connections between American culture and Irish music, and the history of Irish music, particularly in Connemara, focusing on accordion players of the last century.