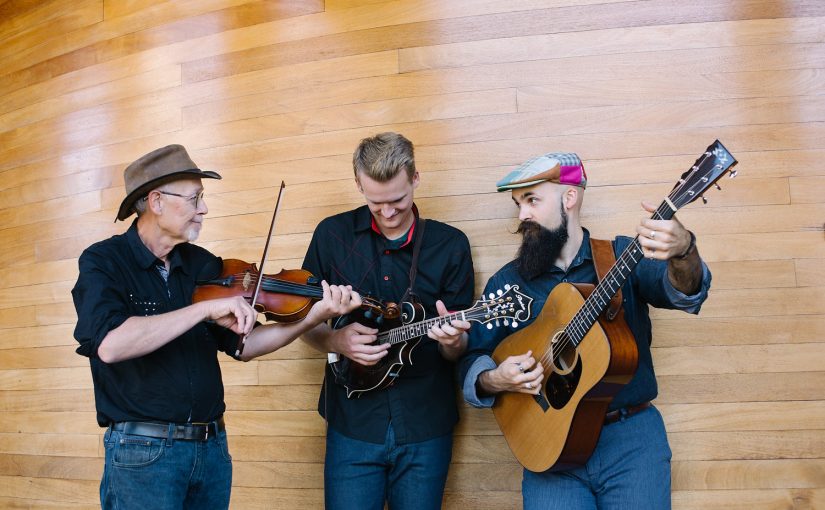 Pete’s Posse is Vermont’s own trad-roots power trio, composed of acclaimed Vermont musician Pete Sutherland, his talented protégé Oliver Scanlon, and the uber-dynamic Tristan Henderson.
With a steady flow of powerful uplifting energy that spans their age gap, they tap into many traditions from the north to south, and east to west, to distill a distinct sound that is completely their own. Quebec newspaper Le Devoir proclaimed, “This Vermont band embodies all the beauty of American roots music.”
Since 2014 the Posse has racked up over 150,000 miles of touring, released 5 albums, and played numerous festivals including Shetland Folk Festival, Old Songs Festival, New Bedford Folk Festival, and more!

The Posse’s signature is variety: all multi-instrumentalists, the band plays a dynamic repertoire of folk-roots genres; songs and tunes, traditional and original. For over four years they’ve been bringing their brand of neo-traditional roots music to festival stages and concert series across the US, Canada and Europe.

We are very excited to welcome this trio to the SFS stage!

“Some seriously stellar three-part harmony… a sobering mix of pragmatism and artistry… (The Posse) represents what’s best about Vermont: reverence for the old, respect for the new and the ability to find a balance.” – Jordan Adams, Seven Days Magazine, Burlington VT
“One of the best trios I’ve seen in a long time!” – Éric Beaudry, musician, De Temps Antan
“…tradition mixed with innovation …The understanding to build on the foundation of musical heritage coupled with the freedom to reflect its depths through outright invention and creation – that’s what you get.” – Tom Franks, Folkwords, UK