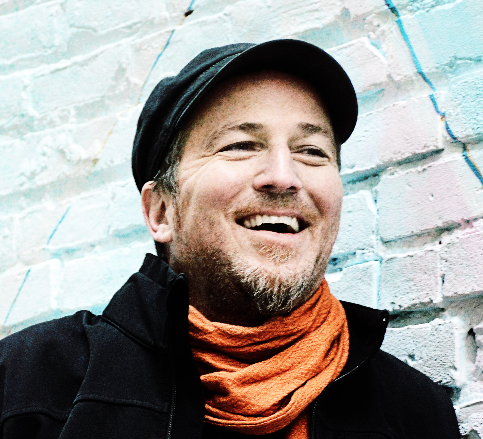 (updated Saturday afternoon) Tickets are sold out  for Peter Mulvey’s concert. We do not expect to have any additional tickets for sale at the door (if you are a fan who has put off buying a ticket, you can try your chances in case another concertgoer has ended up with a ticket they cannot use, but we will not make any promises) We will promise a great night of music from this articulate songwriter though!
Peter Mulvey is an amazing songwriter, with a razor-sharp wit and intelligence. His guitar and harmonica skills are considerable, complementing his readily identifiable baritone vocals.

Over the past 20+ years, Mulvey has pursued a restless, eclectic path as a writer and musician. His music ranges across contemporary folk, jazz, and Americana. Although he is a solo artist, he is frequently doing co-bills with other solos and groups. Mainstage artists that he has played with include: Emmylou Harris, Richard Thompson, Ani DiFranco, Indigo Girls, and Greg Brown. He tours the US, Canada, and Europe, always in touch with his dedicated fan base.

Peter took up music in the mid-80s in Milwaukee, Wisconsin. He played, wrote, and sang in bands while studying theatre there, and then traveled to Dublin, Ireland, in 1989, where he busked on the streets and performed in small clubs. He returned to the US in the early 90s, settling in Boston where he played in the subways full-time. This experience not only strengthened his accomplished guitar playing but also sharpened his innate gifts as a communicator. In a few short years he made the transition to touring singer-songwriter.

He returned to Milwaukee, and has continued his touring, while continuing to regularly create and release albums. His albums have always maintained the spontaneity and edge of his live performances. He also engages in collaborative projects, notable of which was Redbird, with fellow songwriters Kris Delmhorst and Jeffrey Foucault in 2003. He can sit in with nearly any musician or group and improvise in the common language of music.

As a complement to his touring and recording, Peter has also kept a hand in education; teaching guitar and songwriting workshops across the country. His songs and deep baritone voice have been heard in documentary films, major television shows, and by dance and theater companies.

For the past several years Peter has done an annual Fall tour entirely by bicycle, partly for environmental reasons and partly for the sheer fun of continuing his creative, unorthodox approach to a long and fruitful career as an artist.

“Peter Mulvey is consistently the most original and dynamic of the US singer-songwriters to tour these shores. A phenomenal performer with huge energy, a quick fire, quirky take on life, and an extraordinary guitar style. A joy to see.”       — The Irish Times Danielle Ate the Sandwich (Colorado-based Danielle Anderson) is a pop/folk ukulele songwriter, currently touring with Peter. She has six self-produced albums of original songs, and will open the show. Danielle began touring nationally in 2009. She has been creating a fan base with an extensive YouTube channel.

Shirt
The Other Morning Over Coffee
Charlie
The Dreams
TED Talk including 3 songs: 0:10 Kids Down in the Square, 4:28 Some People, 9:46 Vlad the Astrophysicist

Enjoy a great night of music in a casual listening room that seats 150. Coffee, tea, and light refreshments are available.
Tickets $2 more at the door day of show, cash or check.
Doors open at 7:00PM for the 7:30 concert.
Free parking in lot behind the brown brick building.