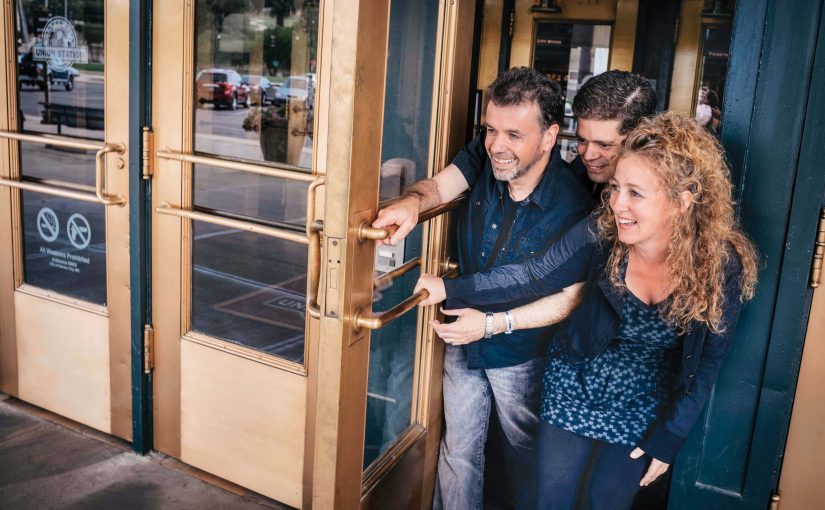 Open the Door for Three is a trio that plays its Irish music powerfully.
They mine tune books, collections, and recordings for old and new tunes and songs. They add to those discoveries fiddler Liz Knowles’ compositions, harmonies, and arrangements, Kieran O’Hare’s encyclopedic knowledge of tunes and the uilleann piping tradition, and the rhythmic bedrock bouzouki and world-class singing of Dublin-born Pat Broaders.
The trio’s members are veterans and mainstays of the Irish music scene around the world, having played with Riverdance, Cherish the Ladies, Secret Garden, Anúna, Liz Carroll, and The New York Pops, as well as with artists like Don Henley, Paula Cole, Bonnie Raitt, and Josh Groban. They have performed around the world: on Broadway, at Carnegie Hall and the Kennedy Center, at L’Olympia and the Palais des Congrès in Paris, in Malaysian rainforest festivals, in theatres from Shanghai to São Paulo, and even a bullring in Mallorca.
Their debut release Open the Door for Three followed by The Penny Wager and now their brand new third CD The Joyful Hour are the culmination of years on the road, comprised of unearthed tunes, new arrangements of great songs, homages to the musicians and bands they grew up listening to, and the signature sound of a trio of good friends playing great music together.
We are privileged to present this trio for a fine night of traditional Irish music as part of our Phinney series!

Featured video: Get to know Irish musicians Pat Broaders, Kieran O’Hare, and Liz Knowles as they work on their trio album “Open the Door for Three,” recorded at Pipe Dreams Studios in Chicago, IL.