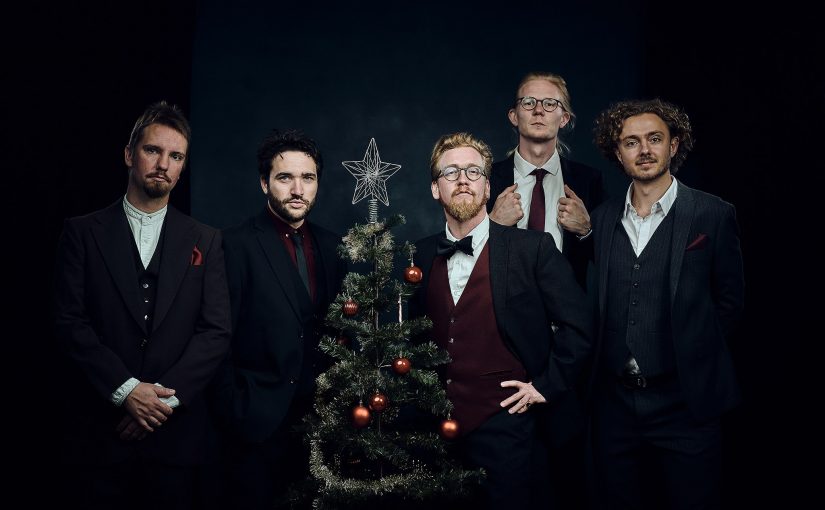 Chase away those post-holiday blues with a special concert featuring the amazing, rhythmic, danceable and somewhat cheeky Mads Hansens Kapel. Co-sponsored by Skandia and the Seattle Folklore Society.  The concert is live from Denmark, via Zoom, on Sunday December 27, at 1:00 PM PST. “Doors” will open at 12:30PM PST.  Tickets are available for $20 on Skandia’s website (www.skandia-folkdance.org). Please, Skandia requests – just as if you were in a concert hall, consider that every pair of eyes in the hall (even the virtual hall) requires a ticket.
The “boys” in Mads Hansens Kapel are Julian Svejgaard Jørgensen (piano), Martin Strange Lorenzen (clarinet), Emil Ringtved Nielsen (electric bass), Sebastian Boesgaard Block Larsen (acoustic guitar) and Jonas Lærke Clausen (violin). Together, these five gents form a quintet that delivers playful takes on traditional and contemporary folk music. Whether listening on the couch (toes tapping for sure), dancing in the living room, or cleaning up from the holidays these Danes will rock your socks with traditional and contemporary folk music.

Pianist Julian is both a skillful live musician as well as composer. He strives to make the piano a laboratory for emotions, stories and imagination, and this can be heard in his work with the band. In 2019, Julian was nominated for a Danish Music Award as Musician of the Year. His music is influenced by Nordic jazz, classical music and of course, northern folk music. In addition to playing in the Mads Hansens Kapel he is part of a trio that moves toward giving new life to
Nordic folk music in the fusion of traditional and classical music.

On the grooviest of clarinets is Martin Strange Lorenzen. He is both a musician and dancer, specializing in Danish traditions. He considered one of his generation’s most fierce and skilled performers of traditional dance music. He is uncompromising when it comes to sound, and pushes his tunes forward with unrelenting drive. A popularly titled “wind-fiddler” he has a very particular goal – to make the world dance again.

It is not often we find an electric bass in a folk band, but Emil Ringtved Nielsen is the real deal! Known for his highly melodic bass playing, he excels at laying down melodies and harmonies on the foundation of a rock steady groove. Playing in multiple groups, Emil is in demand as one of the very few electric bass players in the Nordic folk scene.

Providing some of the rock and roll energy that the band’s hallmark is acoustic guitar player Sebastian Boesgaard Block Larsen. Known from bands like the Kapel, Mysterland and the YouTube channel “The Good Tune.” He is known as both a skilled master of chords and a gifted picker of melodies.

Fiddler Jonas Lærke Clausen completes the band. Trained as a classical violinist, and with a stint as a pop music bass player, rhythm is imbedded in his fiddling. Jonas discovered the folk scene at age 20, visiting jams and discovering the freedom of improvising. Having completed his studies in Danish Folk Music at the Conservatory of Southern Denmark, he is not just in Kapel – he plays two other groups, including Fruens Øye which experiments with rethinking Nordic
ballads from the Middle Ages.

Together, these five musicians explore Danish folk music traditions from sønderhoning to polka, schottis and waltz. At times fluid and melodic, and others driving forward, dance rhythm is always behind their work. It is no secret that they are in demand as a dance band! Pleasing to the ear, their layered arrangements feature aspects of their instruments you might not expect
to hear in the dance hall – or in the virtual concert hall either! Find out more about the band on their website: www.MadsHansensKapel.dk

Tickets are available from Skandia at www.skandia-folkdance.org, via Paypal, at $20. The show is a full length concert, with an intermission. Pull up a chair or put on your dance shoes – either way you are off on a rollicking trip through Denmark!
Questions? Email events@skandia-folkdance.org