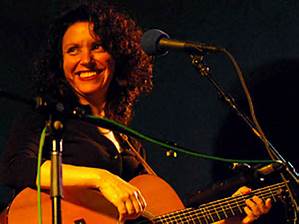 THIS SHOW IS SOLD OUT
Lucy Kaplansky started out singing in Chicago bars, then barely out of high school, took off for New York City.  There she found a fertile community of songwriters and performers including Suzanne Vega, Steve Forbert, The Roches, and others.  With a beautiful flair for harmony, Lucy was everyone’s favorite singing partner, but most often she found herself singing as a duo with Shawn Colvin.

In 1998, after building an accomplished solo career, Lucy teamed with Dar Williams and Richard Shindell to form super-group Cry Cry Cry, and recorded some of their favorite songs written by other artists. The resulting album, Cry Cry Cry, was an astonishing success. A national tour of sold-out concerts by the trio served to introduce Lucy’s luminous voice to a new audience.

In 2010, Lucy joined up with acclaimed singer-songwriters John Gorka and Eliza Gilkyson to record an album as part of new folk super-group, Red Horse.  Awash in gorgeous harmonies and simple acoustic production, the album features the singers performing each others’ songs.

Lucy continues to perform all over the world, although concentrating in the Northeastern US.  When not performing, she lives in New York City, where she enjoys spending time with her family.

We had John Gorka play our series in April, and Eliza Gilkyson in September.  With Lucy’s this performance in November, we will have hosted all members of Red Horse this year, each playing to sold out shows.

Lucy continues to perform all over the world. When not performing, she lives in New York City, where she enjoys spending time with her family.

Tickets, if still available at the door, will be $2 more for adults, payable by cash or check.