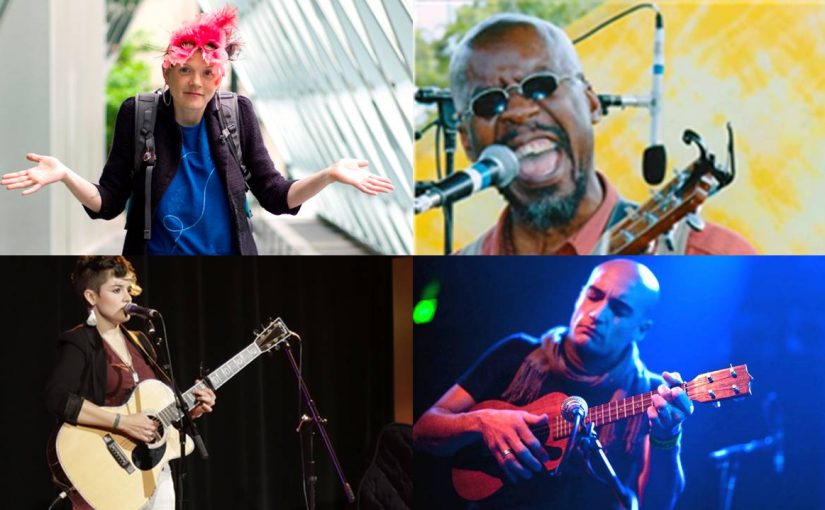 is the purveyor of a unique urban strain of (mostly) acoustic music incorporating a number of diverse influences.  As a songwriter Garrett’s specialty is creating and enhancing a mood, and Dirty Linen has compared him to legends Richie Havens and Bill Withers. He has five CD releases to his credit, the most recent being 2014’s “Something New.”
www.reggiegarrett.com

aims to remind listeners that, through the wide range of life experiences, one can still venture back to the joys of childhood.  Writes one reviewer: “Julia’s powers of flight and the ability to turn sound into light began at a later age.  Much of her energy had previously been spent learning and absorbing the lessons of the world, but when she found a home and deep love in Seattle, her essence flourished fully” (Crosscut).  Peers have hailed her “one of the better, underrated [acts] in the Northwest.”
www.juliamasseymusic.com

A lanky, queer, flat-picking, operatically-trained soprano gone rogue, alt-Americana singer/songwriter LANA McMULLEN has been described as an artist “who stands above a breadth and depth of artistic substance that is hard to ignore” (mxdwn).  Her music’s political undertones and overarching themes of distance and loss recall trailblazers such as Joni Mitchell and Tracy Chapman – actively inviting the listener to explore how values determine one’s personal identity, and how identity shifts when one’s values are challenged.
www.lanamcmullen.com

has spent most of his professional life in Seattle as a working multi-instrumentalist, vocalist, composer, arranger, private instructor, actor, and live- and studio-musician, actively recording for major labels and independent artists as a member of the Musicians’ Association of Seattle.  His original projects include Surrealized (electro-psych-pop) and Tiny Messengers (psych-folk); between the two he has independently released three EPs and two full-length albums, sharing stages along the way with Bonobo, Yppah, Cotton Jones, Buffalo Tom, Langhorne Slim, Sophie Barker of Zero 7, and many more at many significant venues across the region.  Muraki has also been a contributing member for projects such as Super Sonic Soul Pimps, Fences, The Maldives, Marmalade, and Shaprece.  Recent studio-recording credits include: Vance Joy, The Strumbellas (JUNO winner), Ewert and the Two Dragons, and Catherine Britt.
kimomuraki.com