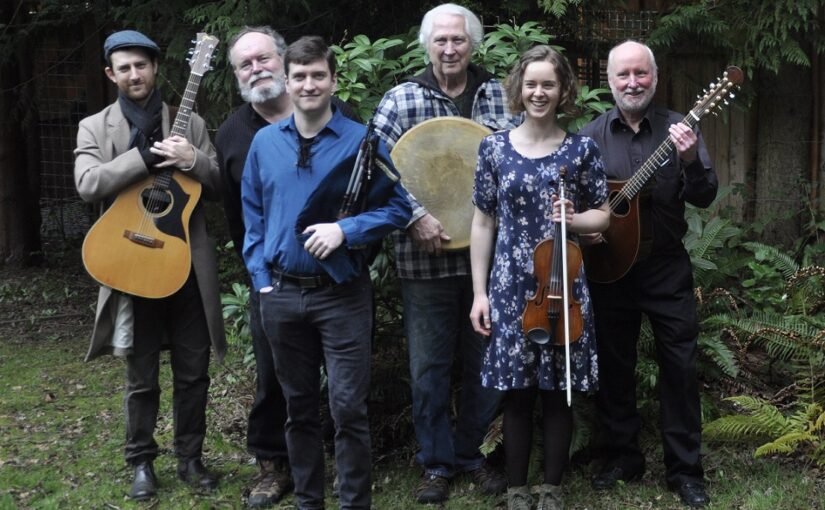 Seattle Folklore is excited to welcome this local band comprised of some of the area’s top talent!  With 7 band members, the music is rich and versatile. Bill Wood on bodhran, Rich Hill on vocals, Brandon Vance on fiddle and vocals, Cameron St. Louis on flute, pennywhistles, small pipes and vocals, David Rivers on guitar, Dave Bartley on guitar and cittern and Vienna Scheyer on fiddle and pipes.

Keltoi was started in 1992 by Bill Woods and the band originally included Bill and Rich Hill plus Ron Rutherford on guitar. They developed a fervent following throughout the Northwest and performed in Vancouver, B.C. and on Vancouver Island, in Washington State on Orcas Island and in Everett, Seattle, Wenatchee, and Yakima, and in Portland, Oregon.  Keltoi made two CDs during this time, Drunk with Autumn and Far Memory.  In 1997 the band broke up and then after a long hiatus of almost 20 years, was rekindled in 2016 when Rich ran into Bill at the Northwest Folklife Festival in Seattle and suggested that it was time to get the band back together.  Ron Rutherford agreed to re-join them, Brandon Vance and Cameron St. Louis were added and the band was off and running again! By spring of 2018 they were ready to start scheduling concerts.

Just before their first concert in 2018, Ron Rutherford moved back to Chicago and David Rivers was signed on as the new guitar player.  In October, 2018, the new Keltoi gave its debut performance at a house concert in Seattle to a packed house and a standing ovation. A new CD, Up from the Ashes was released.

Since then the band has added two new members: the popular Dave Bartley on guitar and cittern and Vienna Scheyer on fiddle, small pipes and highland pipes.

Rich Hill (Vocals) has been teaching and singing in Scottish Gaelic since 1989, is a founder of Slighe nan Gaidheal and Fèis Seattle, and is also well-known in Seattle’s early music scene.

Brandon Vance (Fiddle and Vocals) has garnered premier awards for Scottish fiddling, enjoys a career as a Baroque and contemporary violinist, and holds an M.M. degree from the Cleveland Institute of Music.

Bill Woods (Bodhrán) has published two books on the bodhrán and is in great demand as a teacher.  He has also worked as a session musician on recording projects as varied as classical, heavy metal, New Age and traditional Celtic music.

Dave Bartley (Cittern and Guitar) is a multi-instrumentalist who has played many styles of music over the years and continues to range over several genres.  Popular as a musician for the local contra scene, he has performed throughout the US and Canada, England, Australia, France and Greece.

David Rivers (Guitar) is a graduate of the Berklee College of Music, has played guitar with Abby Mae and the Homeschool Boys, Irish fiddler Erin Hennesse, and is an assistant pastor at Calvary Chapel in Sequim, WA.

As you can imagine, scheduling a 7-member band is not easy!  So far, all seven members of Keltoi have never performed at the same time because scheduling conflicts often cause one or more of our members to be unavailable for a given performance.  The band has mostly been performing at house concerts and private events, so we are really pleased to share Keltoi with you in a concert available to the public!

Get your tickets early for what is sure to be an amazing concert with these top notch musicians.