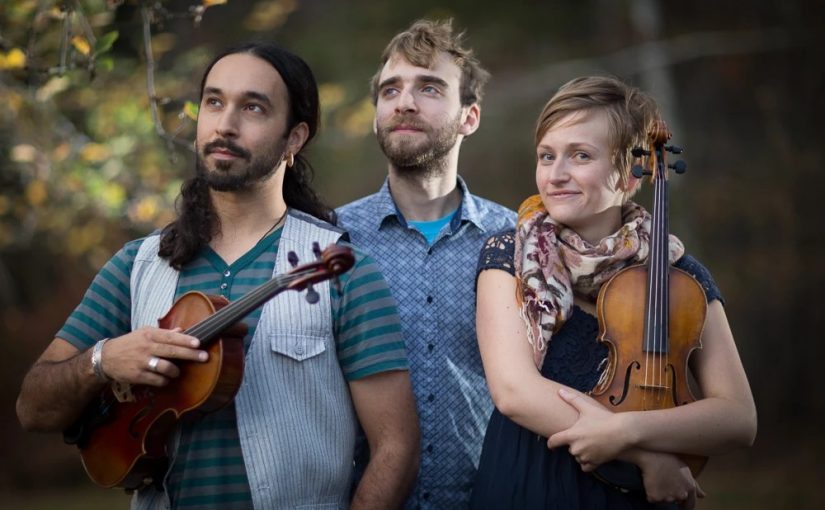 The new face of Scottish fiddling in the USA (The Living Tradition), Katie McNally has made waves in both the American traditional music scene and abroad since the release of her debut album, Flourish, in 2013. Based in Boston, the Katie McNally Trios latest CD The Boston States synthesizes Katie’s elegant and powerful fiddle playing with the talents of genre-crossing pianist Neil Pearlman and bluegrass phenom Shauncey Ali on viola.

The Boston States CD reimagines the historic musical connection between Maritime Canada and New England. This collection of tunes draws inspiration from raw, mid-century recordings of Cape Breton fiddlers in Nova Scotia and Massachusetts and is sculpted by the creative energy of the Boston acoustic music scene. Their music has been featured on NPRs The World and the Thistle and Shamrock and was hailed as one of the best modern Cape Breton records of the past ten years. (Irish Music Magazine)

Katie was recently the cover girl for Fiddler Magazine and has performed and taught fiddle courses in the US, Canada, Spain, Scotland, England and France. As a student of acclaimed fiddler Hanneke Cassel and longtime member of the cross-genre fiddle super-group Childsplay, Katie has appeared on numberous CDs and concert videos and performed in festivals and at folk venues around the world. In addition to her busy touring schedule, she is a popular instructor at fiddle camps where learning music is about joy, community and fun!

Neil Pearlman continues to blaze his own trail making music that ranges from the traditional to avant-garde. Pianist, step-dancer and podcaster, Neil is a force to be reckoned with Brian ODonovan, WGBHs A Celtic Sojourn Neil is recognized in many Celtic music circles for his unique approach to the piano. Rooted in traditional Cape Breton piano styles, he adds jazz harmony and syncopation. Growing up in a musical family, Neil was immersed in Scottish and Cape Breton music and dance from the age of 3.

Shauncey Ali, of Madison, Wisconsin, is recognized nationally as an educator, premier fiddler and violist. In 2014, Shauncey won the prestigious RockyGrass fiddle competition in Lyons, CO. In 2016, he was named the Teacher of the Year by the Madison Area Music Association.

Join us – this concert with the Katie McNally Trio will be blast!