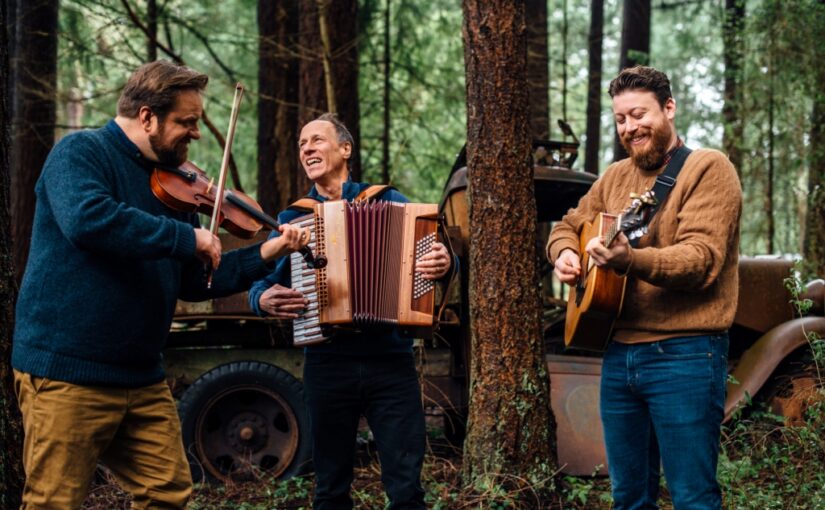 (Update: Although sales have closed for advance in-person tickets, THERE WILL BE TICKETS AVAILABLE AT THE DOOR for tonight’s concert at the Phinney Center! Door prices are $24/$22 SFS, PNA, Student, or Senior/ $10 Youth to age 17, cash or check accepted. Doors open at 7 for the 7:30 show. (Online tickets are still on sale through the website until 6:30 Sunday, to allow viewing starting by 7pm)

We promised you we would bring Kalos back in person after their great livestream show last April. Here it is! Kalos will perform a hybrid live and livestream concert on January 15th . Please join us in welcoming back Pacific Northwest fiddler, Ryan McKasson and east coast guitarist and vocalist, Eric McDonald combined with New England accordionist Jeremiah McLane. Their original Celtic music and ballads influenced by Celtic tradition and New England roots will be an evening to remember.

Kalos’ music asks to be shared and performing live is the band’s heart and forte. Their collaboration goes beyond the music, born of fast friendships formed at the band’s origin and witnesses by their playfulness on stage. Kalos forges a new musical path that draws on Celtic, Breton, American and other musical traditions on accordion, guitar, fiddle, and vocals.

Kalos is made up of these three innovative interpreters and composers of Celtic roots music. They are masters of tradition who will deliver a concert full of spontaneity and joyfulness! Each brings an exceptionally diverse array of musical influences to the table. Eric McDonald studied jazz and bluegrass mandolin at the Berklee College of Music before finding his way to DADGAD guitar; Ryan McKasson carries a degree in viola performance, and is one of the youngest to ever win the US National Scottish Fiddle Championship; Jeremiah McLane, in addition to being raised with Scottish roots, has studied Indonesian Gamelan, West African drumming, and the music of minimalist composers Steve Reich and Philip Glass. His compositions have won numerous awards and been featured in films.