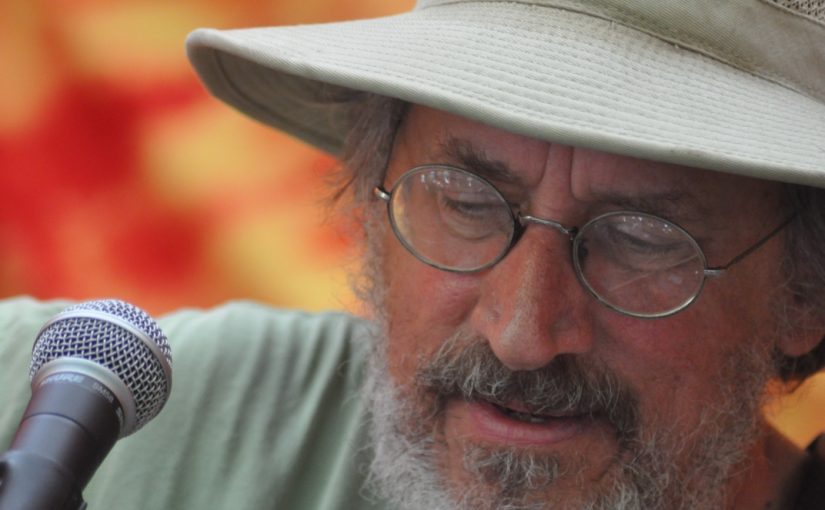 A modern successor to Woody Guthrie, Jim Page has been writing and singing around here since the early 1970s.  Jim Page, www.jimpage.net, has made Seattle his musical home, playing on sidewalks, at Pike Place Market, in Pioneer Square clubs and on the U of W campus.  On Saturday, November 5, he comes inside to the Phinney Neighborhood Center for a Seattle Folklore Society concert.  Local guitar master Orville Johnson will join Jim on stage.

Page says that he started playing and writing songs when “Everyone was expected to sing songs about what was going on around you.  You didn’t have to write them, but you had to sing them.” He has written newsworthy songs since then, taking on nuclear bombs, war, and all manner of current events.  “Jim’s been writing great topical songs for as long as I can remember, bringing his acute wit and wry humor to a host of subjects that can really use both. In the tradition of Woody and Dylan, he cuts right to the heart with music you actually enjoy listening to. I’m a longtime admirer.” Bonnie Raitt

The City of Seattle changed its restrictions against busking in 1974 after Page lobbied the mayor and city council, gathered public support, and testified at a public hearing.  Jim was one of the founders of the Pike market performers Guild, Seattle’s first street performers union. They organized and ran the first and only Busker Festival to be operated entirely by buskers, and he again petitioned the City Council this time to created Buskers Week another Seattle first!

Jim has recorded 21 albums and toured regularly in Europe, on both coasts, and is part of a Grammy nominated “Best of Broadside” recording.  In 2007 he was included in the list of the “50 most influential musicians in Seattle history”, a list that included Jimi Hendrix, Ernestine Anderson and Quincy Jones.