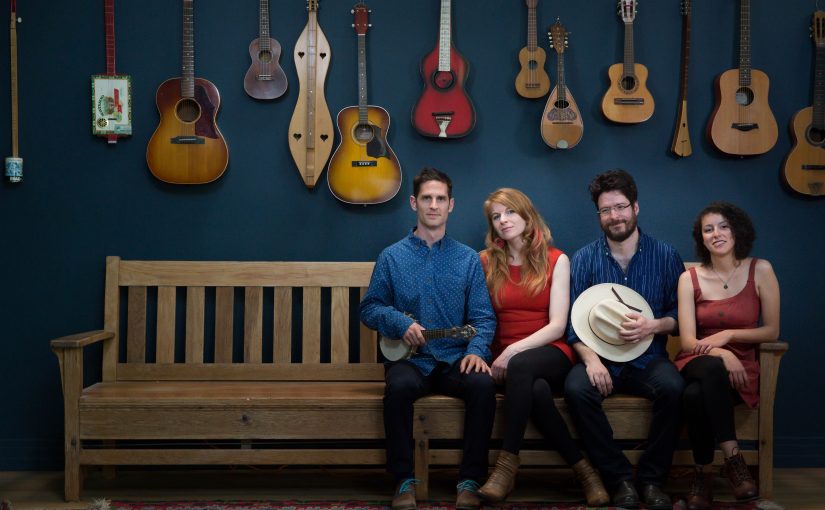 Stemming from the Lomax Project, Jayme Stone’s Folklife treats old field recordings not as time capsules, but as heirloom seeds passed down from a bygone generation. Planting these sturdy seeds in modern soil, this versatile gathering of musicians has cultivated vibrant Sea Island spirituals, Creole calypsos, and stomp-down Appalachian dance tunes for contemporary listeners. Their concerts and educational programs are moving, inventive, and participatory experiences that prove folk songs are indeed perennials for the people. The new album is out now on Borealis Records.

Jayme Stone (banjo, voice) is a composer, banjoist, instigator, producer, and educator. On any given day, you might find him in his studio reworking a little-known hymn learned from a field recording, producing a session with musicians from Bamako or New York, creating experimental soundscapes with electric banjo and pedals, or tucking his kids in on time so he can get back to writing the next verse of a new song.

A “consummate team player” (Downbeat), Stone has developed a process of trawling for understudied sounds in the more arcane corners of the world to see how they’ll land in his musical universe. His many collaborators have included Margaret Glaspy, Moira Smiley, Tim O’Brien, Bruce Molsky, Julian Lage, Dom Flemons, Bassekou Kouyate, and more. Guided by his own aesthetic compass and a desire to let his collaborators “make the sounds that only they know how to make”, he has made a surprise album every two or three years—seven total. Albums like Africa to Appalachia, a polyrhythmic tale of two continents; the Lomax Project, which re-imagines songs collected by American folklorist Alan Lomax; and most recently, Folklife, a companion album to the latter.

Moira Smiley (voice, accordion) is a Singer / Composer who creates and performs new work for voices. A musical polyglot, and vocal shape-shifter, her voice – and composing – are heard on feature films, BBC & PBS television programs, NPR, and on more than 60 albums. She accompanies herself with banjo, accordion, piano and percussive movement, and when she’s not leading her own group, moira smiley & VOCO, Moira has toured with Indie artist tUnE-yArDs, Irish super-group, Solas, The Lomax Project and Billy Childs’ “Laura Nyro Re-Imagined”. She’s also toured with Paul Hiller’s Theater of Voices and KITKA.Recent solo performances include TED, Stravinsky’s ‘Les Noces’, the London Proms Festival, features on BBC Radio3, and ABC Australia’s Books & Arts programs. Moira’s recordings feature spare, vocally driven collections of warped traditional songs, original polyphony and body percussion. She is a well-known choral composer and arranger, with millions of singers around the world singing her works.

Sumaia Jackson (fiddle, voice) is a quintessential modern West Coast fiddler, with driving groove and a smooth, open sound. Jackson weaves together Old-Time, Bluegrass, Swing, and Celtic traditions with an easy virtuosity and melodic elegance. Born and raised in Santa Cruz, Jackson was surrounded by many innovative and inimitable coastal string players and she studied classical violin intensely. Throughout her teenage years she played in classical orchestras, youth symphony, and chamber music settings, refining her sound, and winning awards and competitions. Soon after, Jackson’s musical path widened as she sought out roots communities who played Scottish, Appalachian, Bluegrass, and Jazz.

Jackson tours all over the world with Jayme Stone’s Folklife and Laura Cortese & the Dance Cards—playing places such as the Kennedy Center, Library of Congress, Celtic Connections, Planet Bluegrass, and the Edmonton Folk Festival. She is also a member of the Real Vocal String Quartet (who are currently composing and recording music for a Culture Kin project) and she plays duo with award-winning Canadian fiddler, Adrianna Ciccone. Jackson is poised to release her debut fiddle record—Möbius Trip—in March 2019.

Andrew Ryan (bass, voice) is a bassist, composer, and collaborator from Denver, Colorado where he grew up fostering a love of Classical, Jazz, and American Roots musics. A graduate of Ithaca College where he studied with Nicholas Walker and Shawn Conley, he continued his studies with bass virtuoso and pedagogue Francois Rabbath at Le Domaine Forget in Quebec, CA.

He has since gone on to become an emerging artist in acoustic music, touring with Juno Award-winning banjoist Jayme Stone in his groundbreaking Lomax Project and rising folk-roots artist Kaia Kater. Andrew is also a founding member of The Freewheel Trio, where he is featured as a singer and songwriter. In 2016 Andrew moved to Brooklyn, NY where he joined the 21st-century chamber group 9 Horses, and where he currently resides striving to make music both eclectic and inclusive.

We are partnering with Wintergrass to make this concert possible. Wintergrass ticket holders may receive an additional discount using the code in the ad in your Wintergrass program for on-line sales, or by showing your wristband when you purchase your ticket in person at the SFS table during the festival or at the door.