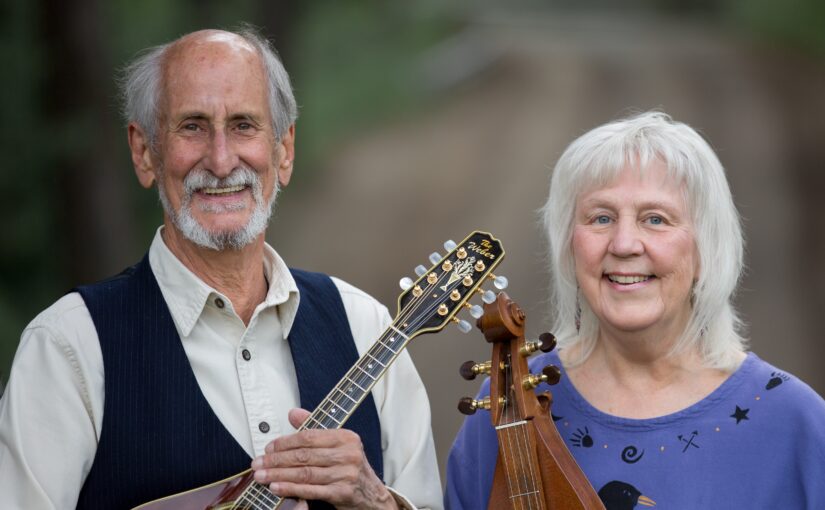 SFS is delighted to bring back this dynamic duo. They have several new songs and tunes to share at the concert.

Described as “arguably Seattle’s most beloved folk singer/songwriter” in the 1990’s by Heritage Music Review, Heidi performed in the Northwest folk scene for two decades. Her song “Good Road” was the theme song of the Inland Folk show heard on Northwest Public Radio for 30 years. Two of her songs were published in Rise Again, the sequel to the legendary songbook, Rise Up Singing. She toured nationally, performing at venues from coffeehouses to the Kerrville Folk Festival and headlining many other festivals before she moved back East, where she became a popular mountain dulcimer instructor and performer.

In 2003, Heidi formed a duo with Bob Webb in Charleston, West Virginia. Bob is a multi-instrumentalist who has played cello and guitar since childhood, and mandolin and mountain dulcimer for over 40 years. He performed with the bluegrass group Swamp Grass in the last USO tour of Vietnam in December 1972. He has worked since the 1970’s as an accompanist, in the band Stark Raven and on the road with WV artists Kate Long and Dave Haas. Stark Raven became the house band for NPR’s Mountain Stage live performance radio show, where he accompanied artists such as Odetta, Tom Paxton, Shawn Colvin, Bill Staines, Peggy Seeger and Arlo Guthrie.

Heidi and Bob now live in Joseph, OR at the foot of the Wallowa Mountains. Besides performing, they both teach lessons online and record their own music and others’ in Bob’s Mountain View Recording studio. They also host an annual adult music camp, Dulcimer Week in the Wallowas, which will go into its eleventh year in 2023.

Enjoy this fun and engaging duo as they share their stories and love of the music.