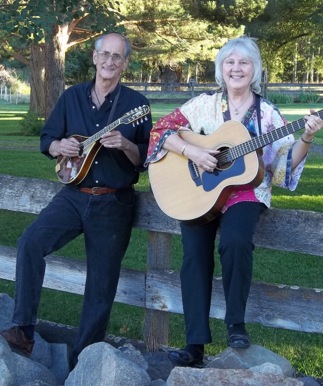 SFS is delighted to have Heidi Muller and Bob Webb back for a concert on Thanksgiving weekend.  The duo will be releasing and playing songs from their new CD, Up Hurricane Creek – their fourth CD together, and the first one in eleven years that features Heidi’s songwriting (following recent recordings of holiday/solstice songs and dulcimer music). [TICKETS]

This collection includes songs of place inspired by the Wallowa Mountains of northeast Oregon, where the duo have lived since 2012, and two songs by the late TR Ritchie: “Wild Horses” and a new recording of his classic “Whitebark.”  Another cut, “32 Pairs of Shoes,” tells the story of Helga Estby, who walked across the country from Spokane to the East Coast in 1896. The CD also features songs about ticks and hummingbirds, and one Heidi wrote after seeing William Pint and Felicia Dale in concert called “Sending Us Home.” Musical backup ranges from Heidi’s and Bob’s own guitar, dulcimer, ukulele, mandolin, and cello, to fiddle, accordion, bassoon, and hurdy gurdy, with vocal harmonies by Pint & Dale and Tracy Spring.

Heidi made her name in the Seattle music scene in the ’80’s and ’90’s. Her song “Good Road” is still the theme song of the Inland Folk show on Northwest Public Radio and KPBX-Spokane after more than 25 years. Bob is a talented multi-instrumentalist and recording engineer who has played cello and guitar since childhood. He played for nine years in the house band for the NPR radio show Mountain Stage, where he backed up many folk music greats including Odetta, Arlo Guthrie, Tom Paxton, and Shawn Colvin.

Heidi has been a featured artist and instructor at Appalachian dulcimer festivals for many years. She and Bob have toured widely, appearing at Kentucky Music Week, Ohio Valley Gathering, Tumbleweed Music Festival, the National Oregon Trails Center, the National Music Museum, Mountain Stage, and others.  Every July they  host their own music camp, Dulcimer Week, in the Wallowas.

Get your tickets now and bring your Thanksgiving guests to the last concert of our fall season on November 26th to celebrate Heidi’s return to Seattle and catch some of the finest acoustic music and songsmithing to be found.