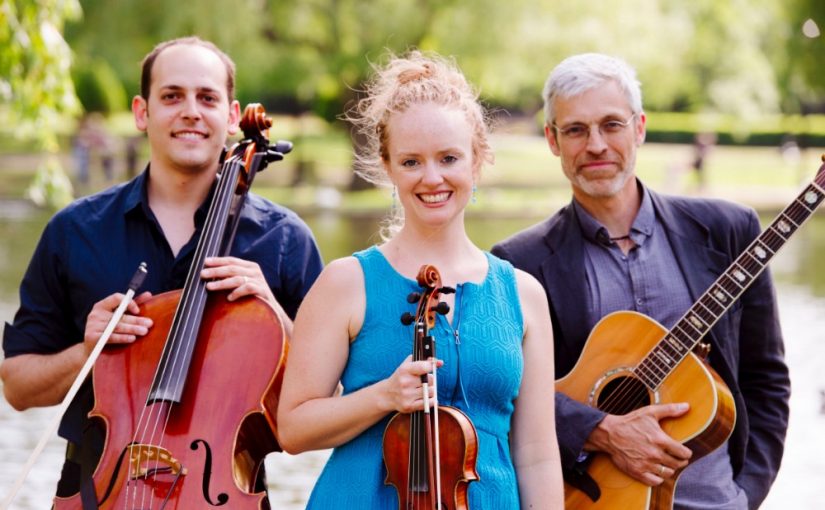 (Update: This concert is sold out!) We’re excited to welcome back the well-loved Boston-based fiddler, Hanneke Cassel! Originally from Oregon, Hanneke is well-known to Seattle Folklore and Pacific Northwest folk music fans. The Hanneke Cassel Band features Mike Block on cello/vocals and Keith Murphy on guitar/vocals. Fusing influences from the Isle of Skye and Cape Breton Island with Americana grooves and musical innovations this group creates a cutting-edge acoustic sound that retains the integrity and spirit of the Scottish tradition.

Hanneke’s music is a blend of the contemporary and traditional, described by the Boston Globe as exuberant and rhythmic, somehow wild and innocent, delivered with captivating melodic clarity and an irresistible playfulness.

A prolific composer, Hanneke writes music from personal experiences of love and loss as well as to commemorate the joys and sorrows in the lives of loved ones. Hannekes latest release, Trip to Walden Pond, features traditional Scottish and Cape Breton tunes and seventeen new pieces composed in the Scottish idiom.

A native of Port Orford, Oregon, Hanneke started out as a Texas-style fiddler and went on to win the 1997 U.S. National Scottish Fiddle Championship, which awarded her the opportunity to study with Alasdair Fraser and introduced her to fiddle camps and the folk community — both of which continue to play an integral role in her life. Hanneke teaches regularly at Frasers Valley of the Moon and Sierra Fiddle Camps, the Mike Block String Camp (run by her husband, acclaimed cellist Mike Block), Harald Haugaard’s International Fiddle School, and the West Denmark Fiddle School. She has served as a guest instructor in the American Roots department at Berklee College of Music, where she received her Bachelors of Music in Violin Performance.

Mike Block is a pioneering multi-style cellist, singer, composer, and educator. Hailed by Yo-Yo Ma as the “ideal musician of the 21st-Century”, Mike is part of the Grammy-award winning Silk Road Ensemble, a graduate of the Juilliard School, and an Associate Professor at the Berklee College of Music.

Newfoundland-born guitarist Keith Murphy began absorbing his native musical languages folksongs, ballads and dance music from an early age. A proficient multi-instrumentalist, he has long applied considerable energy to the rhythmic side of music, becoming a valued band member and highly sought-after sideman on guitar, mandolin and foot percussion.

…artistic and emotive… The interplay between Cassel and Block in particular, whether in duet or harmony, is one of the albums [Trip to Walden Pond] most powerful elements.
Sean Smith, Boston Irish Reporter (June 2017)