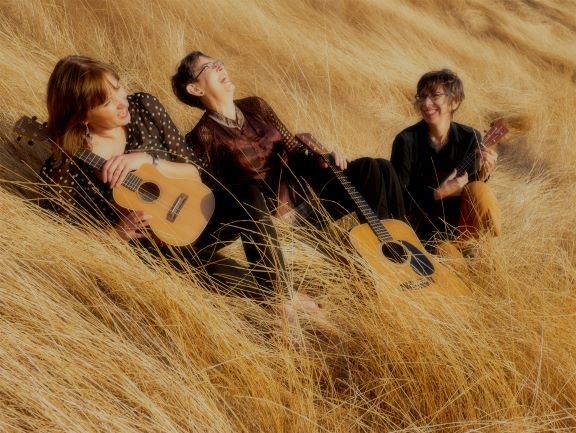 Uncle Bonsai regulars, Arni Adler and Patrice O’Neill, have teamed with Kathleen Tracy to share their love of music and the ukulele, forming the eclectic uke-guitar trio, Go Janes. The Janes combine a love for beautiful melodies with a lifetime of singing harmony, mixing elements from a variety of traditions, including Americana, musical theater, throat singing, and contemporary classical and art song.

Wearer of many hats, Patrice O’Neill is a touring musician, festival producer, sometime audio book narrator, and full-time mother/grandmother. She has performed as a solo artist, releasing two projects of original music, Only Mercy Knows and Elusive. She’s worked with genius songwriter, Andrew Ratshin in The Mel Cooley’s and currently performs with Uncle Bonsai.

Arni Adler has worked in theater, music, film, visual art, multi-media, and creative writing. She is a founding and current member of Uncle Bonsai. Her song cycle for voice, viola, bass, and piano based on poems by Charles Bukowski premiered at Seattle’s Royal Room. Arni exhibits her paintings and collages, and teaches visual art and writing to all ages, with a special love for working with kids with disabilities.

Musician/Mom/Artivist Kathleen Tracy is a composer, arranger, singer, choral director, teacher, workshop presenter and multi-instrumentalist. She performs solo and with others, releasing five projects of original music, Speaking Stones, So Bodaciously (with Linda Severt), Calling the Dragons Home, Like the Stars That Made You, and Thursday Morning Alleleu. She also composes and arranges for theater and dance, most recently for Robin and Marion, Ellen Cooper’s modern day re-write of the Robin Hood story, performed by Anything is Possible Theatre.

On December 15 they will make their Seattle debut at the Phinney Neighborhood Center Community Hall with the Seattle Folklore Society. Storyteller Auntmama will join them to weave her stories into the Go Janes’ songs in this festive holiday season concert.