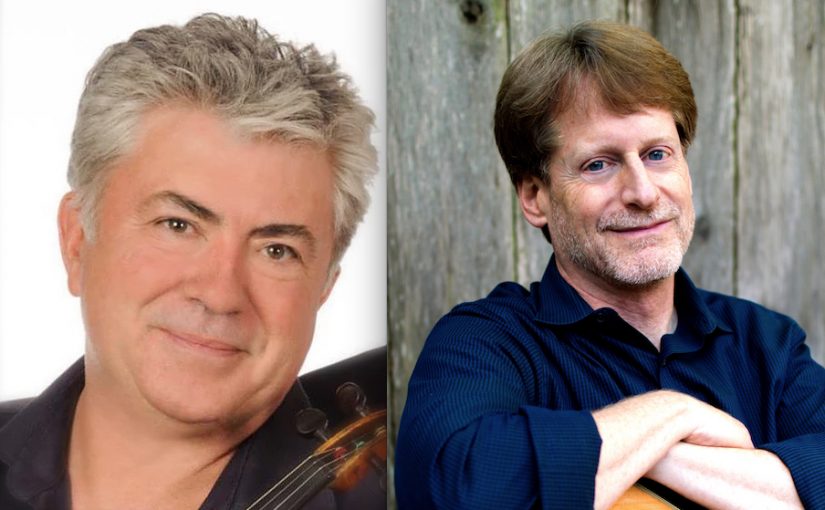 The SFS is pleased to present a virtual concert with traditional Irish fiddler Gerry O’ Connor, accompanied by guitarist Richard Mandel.
Gerry O’Connor is from Dundalk, Co. Louth, where he grew up in a family of musicians, dancers and singers, all taught at home by his mother, Rose. His father Peter was himself a singer whose seven uncles all played music. Rose passed her skill on to hundreds of others over the next four decades, students travelling from Armagh and Dublin as well as counties Meath and Louth to learn from the doyenne of fiddle teachers.

A four times winner of The Fiddler of Oriel competition, Gerry has lately adjudicated both it and the Gael Linn’s Siansa and RAAP /RTE sponsored Breakthrough competitions. He was co-founder and first Artistic Director of Ceol Chairlinn, an annual teaching festival in Carlingford , Co Louth. He is also the Traditional Arts coordinator at the newly established Creative-Connexions Irish/ Catalan Arts festival in Sitges, teaches fiddle at the Willie Clancy Summer School and at master-classes throughout Europe. He has been working and playing with Tiarnán Ó Duinnchin and Fintan Vallely in the Compánach project since 2013.

With a focus on his local music of Oriel, he is known world-wide as a soloist and as a founder band member of Lá Lugh, Skylark and Oirialla. He has recorded 14 albums with his first solo album Journeyman hailed as a landmark album of Irish fiddle music, and has performed with all of the leading performers of the Irish music world including members of the Chieftains, Boys of the Lough, Planxty, De Dannan and Bothy Band. Gerry has published a book of Cathal McConnell’s songs and is launching a tunebook this week featuring dance music of Oriel recorded at the turn of the 20th century. Gerry is also highly regarded as a violin-maker, music teacher and music producer.
www.gerryoconnor.net

Richard Mandel fell into the well of Irish music in the mid-1990s and was soon driving every session he could get into. As a first-call accompanist, Richard has performed with legendary Irish musicians including Paddy Keenan, Jimmy Keane, Gerry  O’Connor, Mick Moloney, Paddy O’Brien, Tony  DeMarco and many others. Richard plays in the trio Three Mile Stone with mandolinist Marla Fibish and fiddler Erin Shrader.  Three Mile Stone released its debut CD, produced by John Doyle, in 2010 and has received rave reviews.  In addition to Three Mile Stone, Richard can be heard on Christa Burch’s CD “Love of the Land” and Radim Zenkls, “Restless Joy”.

Your ticket from Konnectclub will allow viewing during the Saturday night stream, or anytime up until 7PM the following evening. (Tickets will be in sale until 5pm Sunday).
SFS is committed to keeping prices accessible to audiences while providing pay to working artists. Tickets start at $10, $20 per household suggested (Take the discount if you need it; be more generous if circumstances allow)