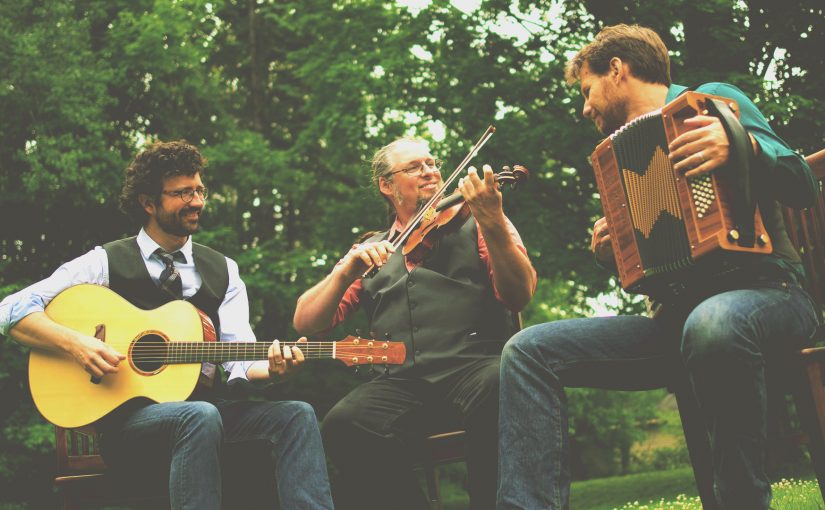 Update: The concert is on as scheduled!  Tickets are available at the door by check or cash. Do not use the parking lots, the hills are slick – it is advised to park above on Greenwood Ave, Phinney Ave, or a flat side street and carefully walk down. Ticketholders: If you find that you are unable to attend, please let us know by 5PM to arrange a refund or credit for another concert. If you purchased on-line, contact Brown Paper Tickets at 1-800-838-3006. If you purchased at another SFS concert, reply to the e-mail sent out this afternoon or contact concerts@seafolklore.org.
Use your best judgement and stay safe!

Genticorum is the popular traditional Québécois musical trio based in Montreal, Québec, Canada with Pascal Gemme playing fiddle, vocals and foot percussion, Yann Falquet on guitar, and vocals and Nicholas Williams playing accordion and flute. Their newest CD, Avant L’Orage was released in 2018. This is yet another splendid album from Quebec’s premier traditional musicians; serious and light-hearted, foot-tapping and singalong. –  R2 Magazine

Over the past 18 years this traditional Québec trio has become a fixture on the international world, trad, folk and Celtic music circuit. The bands six albums have met with critical acclaim in Canada, the United States and Europe, assuring the band a brilliant future. Known for its energy and its stage presence, Genticorum has given more than 800 concerts in more than 15 countries!

Pascal Gemme is a leading light in Québecs traditional music scene. Known as much for his original compositions as his fine interpretation of traditional tunes, Pascal is the fiddler, singer and arranger of Genticorum. From a young age, the fiddle music and song of his native province have captivated him. Pascal has developed a vast knowledge and is a leading exponent of the music.

Yann Falquet is a very active and creative acoustic guitar player on the Québécois music scene. He has developed his own personal guitar style for Québécois folk music, inspired by the musical cultures of Brittany, Scandinavia, Ireland and North America. Yann performs on numerous recordings and tours regularly throughout Canada, the US, Europe and Australia with Genticorum, The McDades, the Jean-Francois Belanger Trio and with cellist Natalie Haas.

Nicholas Williams has developed a reputation as a versatile and sought-after musician in the traditional music scenes of Québec and New England. His rhythmic yet nuanced style of flute playing draws from Irish and Scottish traditions as well as from his studies of classical North Indian music. Nicholas is also an accomplished accordion and piano player.

Firmly rooted in the soil of their native land, the energetic and original traditional power trio also incorporates the dynamism of todays North American and European folk cultures in their music. They weave precise and intricate fiddle, flute and accordion work, gorgeous vocal harmonies, energetic foot percussion and guitar accompaniment into a big and jubilant musical feast. Their distinctive sound, sense of humor and stage presence makes them a supreme crowd pleaser.

“Which is the beauty of Genticorum. Their joyous attack on any subject is transformed by their overall energy and style of playing. Its feel-good music that transcends any lyric and the chance to see these merry wizards deliver the goods live is about as good as music gets.” – Roots Music Canada

Join us for what is sure to be a wonderful evening of traditional French Canadian music!