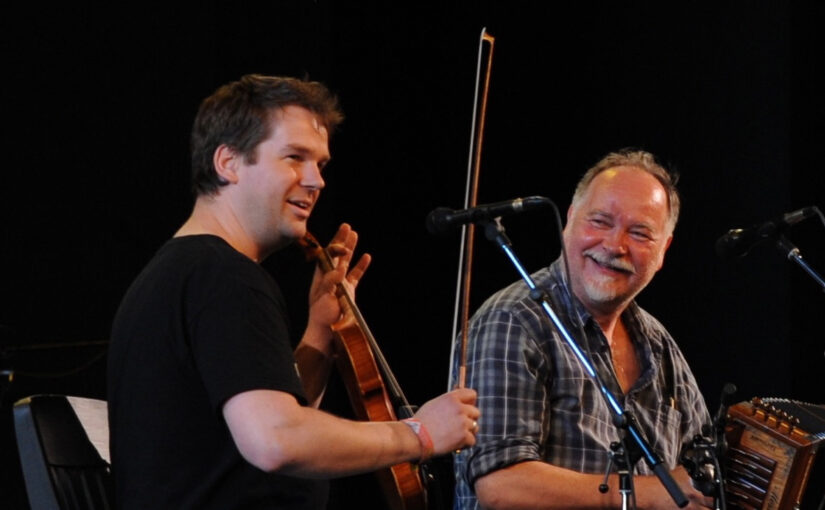 Popular Danish fiddler, Kristian Bugge and accordionist Sonnich Lydom will take us on a journey through traditions of Danish folk music. These lively musicians perform old dance tunes and songs from every corner of their Scandinavian home country. From rural islands like Læsø to the metropol Copenhagen, including a few of their own compositions. Expect everything from wild polkas and jigs to lyrical waltzes, fiery reels and happy hopsas. Plus the exotic “Sønderhoning” dance tunes from the famous Island of Fanø and long forgotten songs from all over the country. They perform and have performed with some of the most exciting and well-known musicians from the Danish and Nordic folk scene.

For many years Sonnich (accordion, harmonica, vocals) and Kristian (fiddle, vocals) kept meeting in many corners of the blooming Danish folk scene, often when there was a jam session going on.
– We always had a lot of fun together and finally decided to bring some of that on to the stage. Now we’ve been playing and touring together for about eight years. It’s been increasing excitingly with more and more activities in both Europe and North America.

Both Kristian and Sonnich were amongst the first twelve musicians to receive the honorary title ”Danmarks Rigsspillemænd” (National Danish Folk Musicians) in 2014. When they perform together, they will also talk about the traditions from back home, how they learned and how the music lives on today and is part of the famous Danish hygge!

Kristian Bugge has specialized in the strong Danish folk music traditions. He is very active on the Danish and Scandinavian folk music scene as well as in the rest of Europe and North America, both as a musician and a teacher. He’s been a popular fiddle instructor at Fiddle Tunes in Port Townsend.  His debut CD was awarded “Danish debut of the year”, and “Danish Folk Instrumentalist of the year” at the 2006 Danish Music Awards Folk (Danish “Grammy.”) At the same occasion in 2012, Kristian received the prize as ”Danish Folk Artist of the Year” and in 2016 Kristian was once more awarded “Danish Folk Instrumentalist of the Year”. 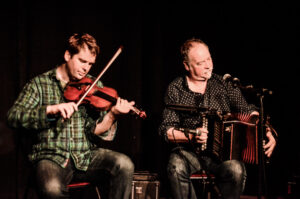 Sonnich Lydom is a master of Irish, French-Canadian, and especially Danish traditional tunes. During the last 30 years he’s been leading the revival for diatonic accordion and harmonica in the Danish folk music. Sonnich holds a special place in his heart for the music from the Western Island of Fanø, where his family is deeply rooted. He is best known for his work with the ULC trio and later quintet (adding jazz pianist Peter Rosendal and bassist Mads Vinding). ULC recieved the Danish Music Award (Danish “Grammy”) in the category “Folk Album of the year” in 2001 and 2004.

Join us for an unforgettable live music experience spiced up with humor and stories from their many years together on the road!