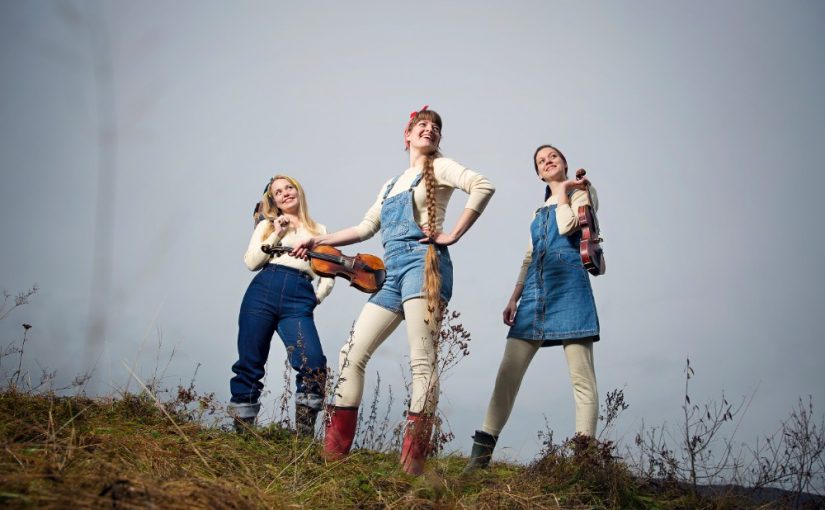 Join us for an evening of grooving and elegant Scandinavian Folk, co-sponsored by Seattle Folklore Society and Skandia Folkdance Society!
Update: Advance tickets will be available on-line until 12:30 day of show, and will then be available at the door ($22/$20 SFS, PNA, Skandia, student, or senior/$10 Youth – cash or check only)

The music of Fru Skagerrak takes you on a journey through Scandinavia; from lowlands to mountains, from slow airs to lively polkas, in major and in minor, and everything in between. Fru Skagerrak- “Lady Skagerrak are three master musicians one from each Scandinavian country: Maja Kjær Jacobsen from Denmark, Elise Wessel Hildrum from Norway and Anna Lindblad from Sweden. The combined result is an explosion of the sounds that exist in Scandinavian music today.

In 2011, these three globetrotting musicians met for the first time at Tønder Festival, Denmarks biggest Folk Festival, in a roaring session that had engulfed the backstage bar. Through the mayhem of tunes you could feel a certain Scandinavian groove, and in that moment the connection between the three fiddlers was clear. The trio brings together the diverse traditions from each of their homelands, which surround the Skagerrak strait. Through a repertoire of traditional tunes, new compositions, and songs in their respective languages, they express their kinship and love of their shared heritage. The self-titled debut album was released in May 2016, and their second album Ankerdram was released in April 2018.

The fiddle playing and singing of Maja Kjær Jacobsen (Denmark) is beautiful and intense. She has travelled and performed in many different countries, performing her darling, the exotic sounding traditional music and gorgeous songs of Central Jutland in Denmark. Her own compositions radiate a special power, and she can bring out cinematic soundscapes from both her more delicate tunes as well as the raw and breathtaking reels.

Anna Lindblad is a versatile fiddler from Sweden. Her powerful 5-stringed fiddle playing is steeped in groove, joy and presence. Anna is just as old-fashioned as she is innovative and with a nod to the tradition she brings her music forward, blending all her diverse musical interests into a very special voice thats all her own. With a heart beating for Swedish tradition she is not afraid to mix it up with other musical ways of expression.

Elise Wessel Hildrum is one of quite few Norwegian folk fluteplayers. She grew up playing mostly classical music, but discovered the world of folk music at the age of 20 and decided that this was what she wanted to play. As a recorder player it was natural for her to learn the Norwegian sjøfløyte (sea-flute) tradition from Numedal. This has been the core of her repertoire through several years of folk music studies. Elise also plays fiddle and viola and sings.