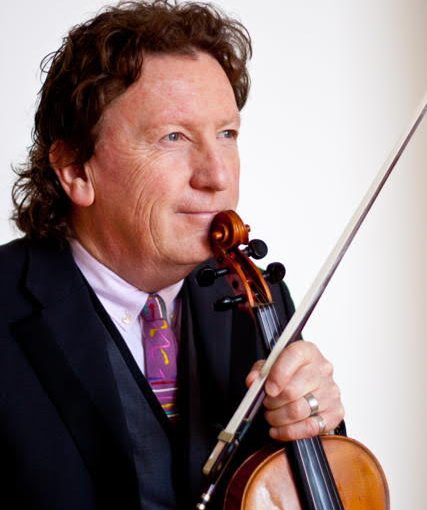 Frankie Gavin is one, and perhaps the best of, Ireland’s premier traditional fiddle players. And in a land that produces many prodigiously talented players, that is saying a lot.
In a nutshell, Frankie has been playing since the age of four, when he was handed a whistle, and has since performed for four presidents beginning at the age of six; is a founding member of the legendary Irish traditional band De Danann, in the forefront of the renaissance of trad Irish music along with Bothy Band and Planxty (and the reformed New De Danann); performs and records with other luminaries in the Irish traditional music scene and more, such as Yehudi Menuhin; was in the 2010 Guinness Book of World records as the world’s fastest fiddler; has just recently win the 2018 Musician of the Year award from Ireland’s prestigious Gradam Ceoil Arts Academy; AND recently performed for the Pope in Dublin!
Frankie’s artistry is amazing; he is a master of control over bow and fiddle, and making each piece of music delight the ear. He strives to bring each traditional piece into a setting that is appreciated equally by lovers of old and new, and is rousing enough to get you to kick up your heels! His concerts also share anecdotes about his childhood and life on tour, themselves worth the price of admission! But perhaps a Frankie Gavin concert can be best summed up by Fintan Vallely in the Irish Sunday Tribune:

Innovation may be the buzz-word in Traditional music, but Frankie Gavin’s digressions are not in the common areas of tempo and superficial style-impressions. His contemporary borrowings of art-deco and music-hall Irishness are re-jigged in original avenues of exploration. His dextrous treatment of troublesome tunes might get even the Pope out on the floor, his orchestration could break hearts.

To have the opportunity to watch him play and see the joy he has for the music, and to feel the energy he packs into his shows, is an uplifting and rousing experience for all ages!