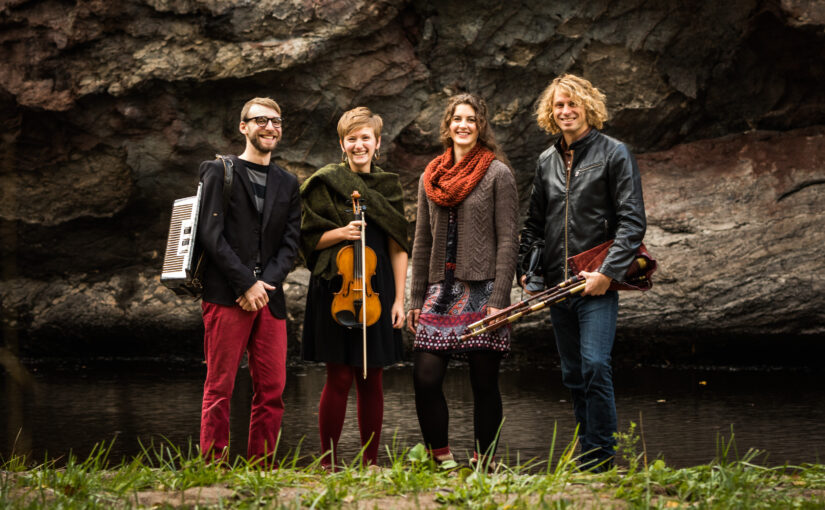 The livestream is completed. You can still buy tickets (to stream the recorded show) up until 6:45 PM on Sun, May 23rd, 2021. You’ll need to begin watching before 7 PM. Get your ticket and stream here:

Powered by four of the brightest voices in a new generation of traditional musicians, Fàrsan unites song, dance and instrumental music from the Gaelic traditions of Scotland and North America. Gaelic has long been a culture on the move; with strongholds in Scotland and Cape Breton, the language and music have travelled to the farthest corners of the New World, finding new homes and nurturing communities in the unlikeliest of places.

Fàrsan’s music is a product of this legacy of movement and migration. Màiri Britton, Katie McNally, Neil Pearlman and Elias Alexander each represent an engaging new take on their cultural traditions. Màiri’s Gaelic song and stepdance repertoires have a foundation in her native Scotland but are heavily influenced by her current work teaching and researching song and dance in Nova Scotia. Katie’s fiddling and Neil’s piano and stepdance continue the strong connection between New England and Maritime Canada, both having grown up in the Scottish and Cape Breton music community that surrounds Boston. Elias brings an American flair to the Scottish border pipes, merging a love of the tradition with a wealth of new ideas.

Song, instrumental and dance traditions are sometimes viewed as three separate worlds, but Fàrsan challenges that notion. They bring together the melodies of Gaelic songs and puirt-à-beul (mouth music) with their instrumental counterparts and draw rhythmic stepdance seamlessly into the mix. The result is a unique combination of sound and movement which delivers vibrant energy to every performance.

Fàrsan’s SFS concert will be a mix of live and pre-recorded tunes. Be sure to join us for a fabulous concert with these wonderful musicians and dancers!

Your ticket with Konnectclub will allow viewing during the Web premiere (Starting at 7pm, Saturday May 22) and a link to the live Q & A following the concert  – plus allow re-watching any time up until 7pm the following evening.  Pay as you are able, starting at $10 ($20 per household suggested, take the discount if you need it, be more generous if able).

“Fàrsan offers a refreshing approach that nurtures rather than reinvents the rare traditional material gathered from collections and individuals from various corners of Gaeldom…the simplistic richness here sprouts from the raw authenticity and respectful, close musical camaraderie that surrounds this quartet.” – Penguin Eggs, Spring 2019 (featured on their front cover)

“They combine song, dance and instrumental music from Scotland and Cape Breton, and theirs is a distinctive blend of fiddle, pipes, whistles, piano and accordion with percussive stepdance and puirt-à-beul, providing us with a most appealing sound of purest musicality. [. . .] The group’s presentation of songs sad, lively and thought-provoking, shows their remarkable ability to convey meaning and mood with honesty and grace.”  – Irish Music Magazine, April 2019

“A very polished performance, plenty of variety and a new perspective on some of the best music from the Scottish diaspora, Fàrsan is a breath of fresh air for any fan of Gaelic music on pipes, fiddle or voice.” – Folk World, March 2019