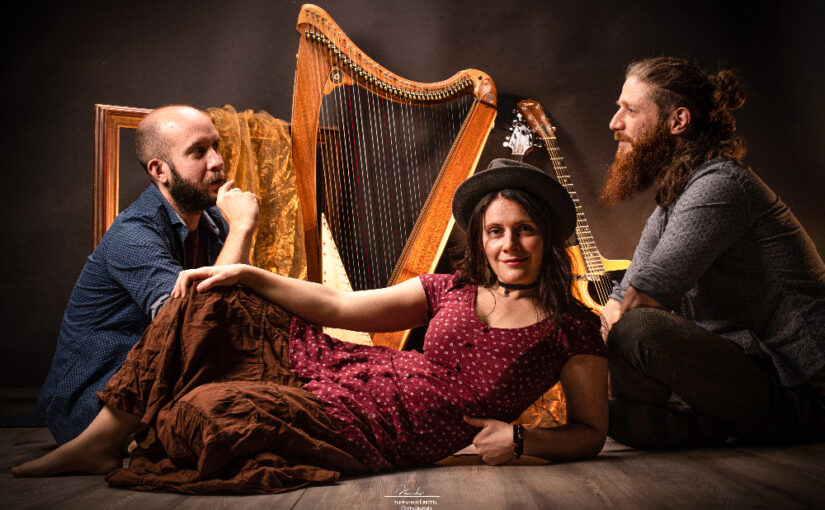 Ensemble Sangineto is an eclectic band from Italy which  skillfully blends ancient harmonies and sonorities with modern rhythms. The wide-ranging musical experiences of the individual members converge to create fresh arrangements of traditional Irish, Scottish, Breton & Italian tunes. Their original compositions  display influences from many varied musical genres ranging from classical to folk, from Gregorian chant to musical, from pop to Celtic music.  The delicate combination of the pure and magic tones of the harp and of the bowed psaltery with the guitar intermingle with the three voice-polyphonic texture evoking dreamlike and airy atmospheres,  simultaneously joyful and light.

In 2021, the trio released Grand Tour Vol. 1 – the debut album of a 2-part project conceived by Ensemble Sangineto as a tribute album to Italian traditional music with fresh interpretations of a folk tune from each of the 20 Italian regions.

“Le Grand Tour – Songs and Enchantments from the Alps to the Mediterranean Sea” is an involving performance which presents a musical trip exploring the all Italian regions through the reinterpretation of their varied music traditions. Ensemble Sangineto’s main purpose focuses on the melding of Italian folk tunes with an international modern flavor, in the perspective of a continuity and renovation of the Italian folk music drawing on other European countries’ traditions (especially, the Irish, French, Breton and Scottish). Charming melodies, original and astonishing arrangements, the delicate polyphonic texture of the three voices and punchy vibrant rhythms, an innovative and unpredictable use of the timbral potentialities of the harp, the bowed psaltery and the bouzouki.  A fabulous music journey not to be missed!

SFS is delighted to be able to present a special online concert, recorded in Italy especially for Seattle audiences  – and anyone intrigued by their wonderful harmonies and mesmorizing instrumentals!
The concert will premier starting at 7pm, Saturday  May 21st, and be available until Tuesday evening (Start viewing anytime before 7pm Tuesday, May 24th. Your ticket code will allow continued viewing or re-watching within 24 hours once you begin, within this time period.)