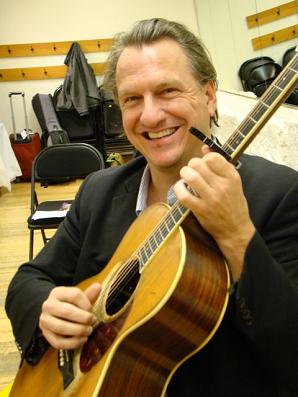 TICKETS AVAILABLE AT THE DOOR.  See a great show with one of the best contemporary folk artists in the country.  Relaxed listening room, light refreshments available.

Ellis Paul is one of those gifted singer/songwriters. Though some may refer to him as a folksinger, he is more, for lack of a better word, a singular storyteller, a musician whose words reach out from inside and yet also express the feelings, thoughts and sensibilities that most people can relate to in one way or another, regardless of age or upbringing. The exhilaration of the open road. A celebration of heroes. The hope for redemption. Descriptions of those things that are both near and dear. The sharing of love…, intimate, passionate and enduring.

A troubadour, a singer/songwriter, a folky, and a storyteller — are all fair labels for Ellis, but they do not quite suffice. However, the tattoo of Woody Guthrie worn proudly on his arm is a good starting place to know Ellis Paul. It is from the Woody Guthrie tradition that he hails. With an acoustic guitar in hand, he weaves intimate, provocative, and romantic tales of our lives.

Singer-songwriter great Bill Morrissey paid Ellis perhaps the ultimate compliment, saying “… Ellis is always himself; he doesn’t try to separate himself from his audiences. Perhaps it’s because he’s a Mainer; there’s no pretense, and the audiences sense that.”

Launching his career in Massachusetts, Ellis has been called the quintessential Boston songwriter more than a few times and has garnered the recognition and awards to back up that claim. Since coming onto the scene in 1993, Ellis continues strong as a performer and a writer. Spending two-thirds of most years on the road has helped him perfect both crafts, with a lot of practice on-stage and a lot of people whose stories he retells in song.

Over the years and albums, his songs have been personal. He has turned out cds consistently through his 20+ year career. In 2008 he released a children’s music cd, Dragonfly Races, which was inspired by the birth of his second daughter.