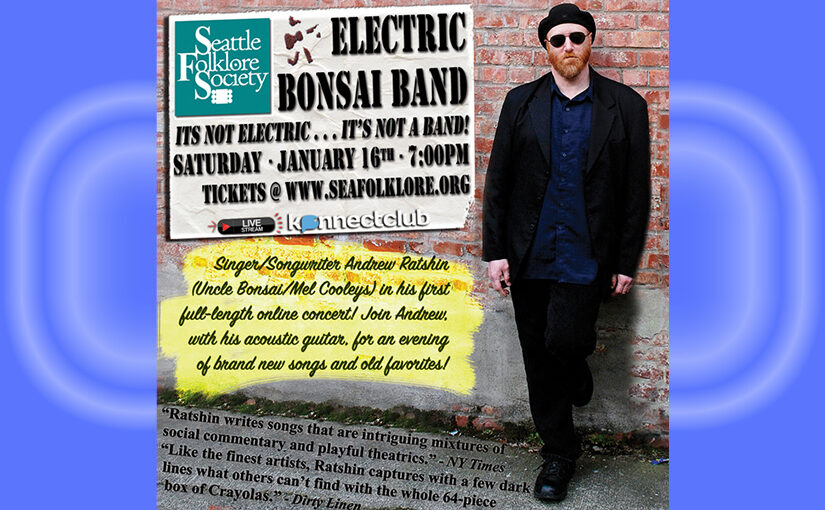 SFS is proud to kick off our 2021 Virtual Season with Electric Bonsai Band! Not electric,  not a band…it’s actually singer/songwriter Andrew Ratshin, and his acoustic guitar.

Best known as a member of, and principal songwriter for, the group Uncle Bonsai, Andrew has released five solo albums of original material and been included on a number of compilation projects and group tours.
With the release of his debut recording, “I Am Joe’s Eyes”  Andrew began headlining at clubs and festivals across North America. Following up  with the release of 20 Seconds Of Pleasure (a collection of 20-second and 40-second songs) and the critically acclaimed But I’m Happy Now, Andrew established himself as “one of the premier songwriters of his generation” (The Maverick Report)
The release of Lounging In The Belly Of The Beast had Sing Out magazine proclaiming Andrew “an absolute original” and say that “there’s more than enough brilliance here to entice and seduce open minded listeners who appreciate exceptionally well written songs.”

Andrew continues to perform solo and with Uncle Bonsai; he is currently working on his Seven Sins, Seven Wonders, Seven Dwarfs song cycle, and has begun recording his sixth Electric Bonsai Band release, The Other Glass.

This concert will be the first performance by Andrew this year, in person or streaming. He will be sharing some brand new songs, as well as songs from the “Seven Sins, Seven Wonders, Seven Dwarfs” song cycle, and a couple old favorites. It will be presented in one set, approximately one hour in length.
We can’t wait!

Tickets are available through the link here starting at $10  (Pay what you want  with adjustable levels. The suggested “regular” ticket is $20). The concert is hosted by Konnectclub. A link will be sent upon purchase, for a Live Stream beginning at 7pm. (The concert will be also viewable for ticket holders up until 7pm the following evening after the Live Stream completes)