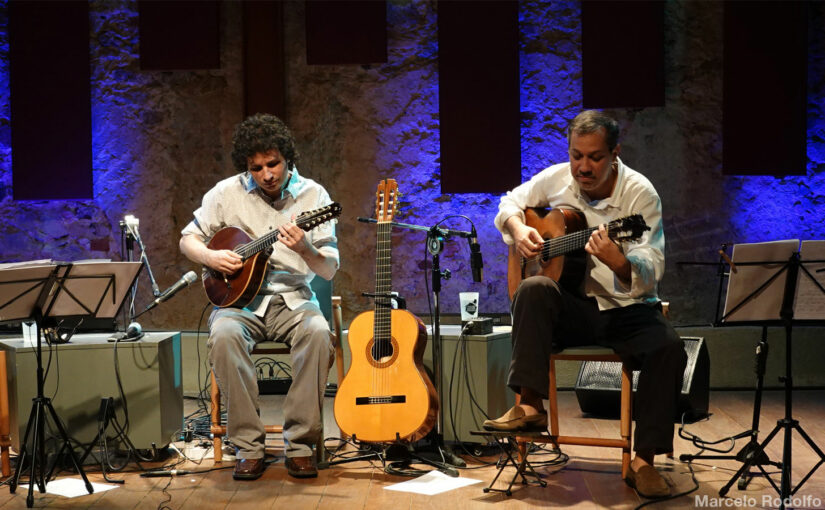 With formative musical experiences from Rio de Janeiro and Bahia respectively, Gabriel Improta and Almir Côrtes have deepened their understanding by researching the music at their very talented fingertips. In their duo, classical guitar and 10-string mandolin combine into an orchestral richness of Brazilian popular music. They relish the diverse musical styles that harmoniously thrive in their country, from the Belle-epoque valsas of Ernesto Nazareth to the poetic Tropicalismo of Caetano Veloso, the jazzy impressionism of Tom Jobim’s bossa nova, and the AfroBrasileiro intensity of Moacir Santos. In their own compositions, they create a contemporary interplay of fretted strings.

Guitarist, composer and arranger Gabriel Improta grew up among professional musicians and began his own career in his teens, which has taken him in many directions. As an artist, he studied guitar performance at UNIRIO and at the Guitar Institute of Technology in Los Angeles with Scott Henderson. He has soloed at international festivals such as the 2002 Havana Guitar Festival, and worked over two decades as a guitarist and arranger with important Brazilian performers such as Maria Bethânia, Caetano Veloso, Roberto Carlos, Carlinhos Brown, Paulo Moura and Francis Hime, among others. He mastered in musical composition at UNIRIO and has released three CDs as a soloist, arranger and composer. In 2005 one of his three ensembles, Garrafieira, won Best MPB Group in the national music awards Prêmio TIM.

As well, Gabriel is a music teacher and researcher, with eighteen years of teaching experience, including adjunct professor at UNIRIO since completing his doctorate in social sciences in 2015 with an ethnographic study of the Sambajazz movement and its musicians in Rio de Janeiro.

Almir Côrtes plays many fretted instruments – mandolin, acoustic and electric guitar, the folkoric viola caipira, and the rarely-seen guitarra baiana, which he knows from his native Bahia, Brazil. He plays genres that are considered “traditional” or “regional” (choro, frevo, baião, etc), but with a contemporary approach that includes experimentation and improvisation. Almir has performed with Howard Alden, David Grisman, Mike Marshall, Nailor Proveta, Armandinho Macêdo, Daniela Spielmann and Harvey Wainapel, among other luminaries, as well as leading his own Trio. In 2005, his composition Freveando was awarded the Best Instrumental Music prize at the III Festival de Música Educadora FM in Bahia. He released five CDs.

Equally in demand as a teacher/scholar, Almir is currently a professor at the University of Rio de Janeiro’s Villa-Lobos Institute. His master thesis for UNICAMP analyzed the style of Jacob do Bandolim, and for his music doctorate, he researched idiomatic improvisation in Brazilian music. He has played professionally and held workshops in Brazil, Cuba, Italy, France, Spain, and United States, including as visiting artist at Indiana University, San Francisco State University, and the Latin Music and Culture Celebration, organized by the Berklee College of Music, and as instructor in 2011 and 2012 at the Santa Cruz Mandolin Symposium.

“Almir is a virtuoso instrumentalist who swings like mad in a variety of musical styles and improvises with great energy and creativity. He is a world class performer.” — Mike Marshall

Your ticket through Konnectclub will allow viewing (and live chat) during the livestream from Rio de Janeiro, or viewing any time until 7PM Sunday April 18th.

We are committed to keeping prices accessible to audiences while providing pay to working artists. Tickets start at $10, with $20 suggested per household.