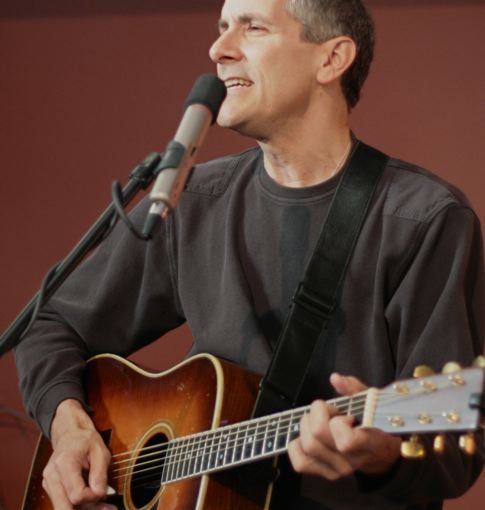 David moved to Cape Cod in 2000 but has come back to the Pacific Northwest every spring since then, and we’ve happily sponsored him a number of times (no matter where he lives).  What can you expect at one of David’s concerts? He ranges from holistic to hilarious, poignant to improbable…think James Taylor meets Jon Stewart.

David cemented his connection to the folk music community on the streets of Greenwich Village in the 1980s. Now in his 29th year of full-time music-making, and with 13 CDs to his credit, David’s songs have found their way to Carnegie Hall, the United Nations, Chicken Soup for the Soul books, the Kennedy Center, the Kingston Trio, Peter, Paul, & Mary concerts, NASA’s Goddard Space Center (his song, “Rocket Science” went up on the space shuttle Atlantis in 2009), and the “Rise Up Singing” Songbooks.  As former artist-in-residence at New York’s Omega Institute, he has taught singing, songwriting, and performance at the Swannanoa Gathering in North Carolina each summer), the Augusta Heritage workshops, Moab Folk Camp, and for many other songwriting groups. He has appeared at countless coffeehouses, conferences, concert halls, and festivals.  But you can come hear him on April 29th.
https://www.youtube.com/watch?v=ybFBprnUXQ8