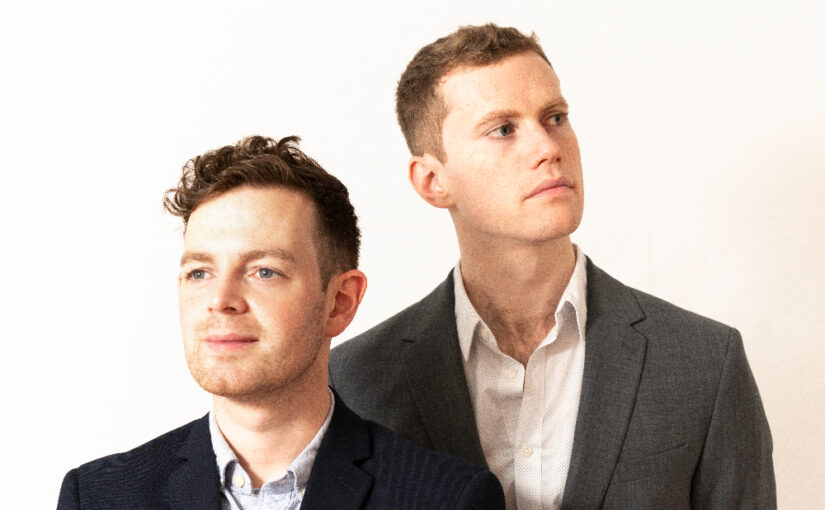 (Update: Tickets will be available at the door tonight, payable by cash or check. The doors open at 6:30. The in-person concert starts at 7pm, Sunday Jan. 23rd, lasting until approximately 9:30. The online concert will be available until Monday night  – start your viewing by 7pm Pacific Time)
We are delighted to welcome Andrew Finn Magill back to the SFS stage, this time paired with Irish singer, multi-instrumentalist, and stepdancer Dave Curley.

Dave Curley is one of Ireland’s leading multi-instrumentalists, vocalists and a champion step dancer. Hailing from Co. Galway on the west coast of Ireland, Curley has brought his wealth of talents to the largest of stages in North America and Western Europe. He has an outstanding voice and a dynamic instrumental prowess which  can also be heard with the groups Slide, Runa, and One for the Foxes, and as a guest with many other musicians.

For twenty years North Carolina-native violinist/fiddler Andrew Finn Magill has been pursuing parallel careers in traditional Irish music, Brazilian choro, jazz and American fiddle. Magill learned from the best fiddlers in the world at The Swannanoa Gathering and is a Fulbright fellow, North Carolina Arts Council Fellow, and Ropeadope Recording artist. He has been featured on MTV and multiple times on NPR’s The Thistle & Shamrock. His 2016 album Roots (featuring Cillian Vallely of Lúnasa and John Doyle) debuted at number #46 on the folk DJ charts and since then he has toured internationally and headlined several Irish festivals. He has performed with grammy-nominees John Doyle, Trio Brasileiro and Rising Appalachia among manuy others. In 2020 he released albums with former Paul McKenna Bandmate Seán Gray, and Scottish singer and guitar & bouzouki-player Alan Murray.

The original acoustic music of this duo has an Irish foundation but draws on a myriad of influences. Come hear two of the most exciting young musicians in the U.S. for a night of original music!

This concert will be presented both in person and online. Tickets are available for the live concert, livestream (with 24 hour viewing period), or a combo: In-person at Phinney(advance prices) $22, $20 SFS/PNA member/senior/student, $10 Youth to age 17; adults $2 more at the door ($24/$22/$10). Online options ($20/household general, discount need-based level or “Super-Supporter” levels, or $5 add-on to the live ticket) are also available.