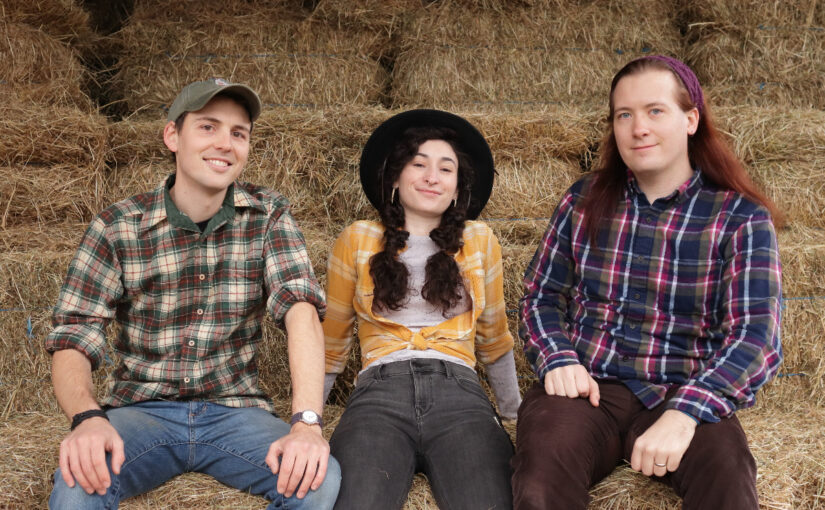 (Update – tickets will be available at the door tonight for the in-person concert! Door prices listed below – cash or check. Proof of vaccination required)
A special concert with three versatile and powerful local musicians, steeped in tradition and carrying it further: Traditional & original songs and tunes from Brian Lindsay (fiddle, banjo), Alex Sturbaum (guitar, bouzouki, accordion), and Penka Jane Culevski (Fiddle). Expect driving rhythm and foot percussion from Countercurrent, whimsical and articulate songs composed by Alex, and thrilling old-time tunes and harmonies from the trio including Penka Jane – overall a fantastic evening! This concert is co-sponsored by Emerald City Contra Dance.

The in-person concert starts at 7:30pm, Saturday, April 2nd. Ticketed online viewing will be available during the Livestream, until Tuesday night April 5th. Once you begin viewing you will have 24 hours to complete viewing or rewatch the online concert within this time.)

Alex Sturbaum is a one-of-a-kind performer. Steeped in musical traditions from both sides of the Atlantic, they are equally comfortable performing for dancers in a crowded grange hall, singing original songs at an intimate house concert, belting out sea shanties at a pub sing, or playing bluegrass music at a festival. Alex’s love for the music and joy in performing it is evident in every note they play. Alex grew up in Cincinnati OH, on the banks of the Ohio River. Born into a musical household, they soon fell in love with the jigs and reels of Irish and Scottish music, the sea songs of the Canadian maritimes, the fiddle tunes and ballads of Appalachia, and more. Alex studied at the Riley School of Irish Music in Cincinnati before attending Oberlin College, where they began playing music for contra dances and never looked back.
Alex is best known for their powerhouse guitar and accordion playing, their sharp, traditional-sounding lyrics, and their enthusiasm and appetite for collaboration – the latter of which has led some to call them “one of the most get-sh*t done people in folk music”. They tour regularly as a solo artist and as half of the duo Countercurrent with Brian Lindsay. They also teach, record, and produce projects such as The Vashon Sessions (a collaborative music project connecting musicians across the Pacific Northwest) and Raise the Rafters (an annual traditional singing weekend). They have performed on many albums, and have released three solo albums: River Run Wide, Loomings, and Atlantic Dreams.

Brian Lindsay has been dancing since he could walk, singing since he could speak, and holding a fiddle to his chin for most of his life. Surrounded by both contra dance and Irish music and dance throughout his childhood, Brian spent much of his youth going to sessions in the NY area and studying with respected Irish fiddle player Brian Conway. An accomplished performer and Mid-Atlantic Irish Fiddle champion by the age of 17, Brian has also found the influences of many other musical styles and traditions make their way into his playing. Starting at a young age, other instruments started to enter his vocabulary, including the banjo, mandolin, guitar, and Irish tin whistle. Brian’s skill as a multi-instrumentalist extends especially to the voice. As an experienced performer of folk songs both new and old, Brian creates unique arrangements and thought provoking harmonies.

Penka Jane Culevski began playing fiddle as a child and has been singing since she first heard the radio. After discovering a love of traditional Irish music, Penka Jane found Old-time, Bluegrass, and Quebecois music along the way. She began songwriting in earnest in 2018 and has been cultivating this new avenue of musical expression. In addition to Dear Crow (with Brian Lindsay), she has performed in the Seattle and Olympia areas with the Choice Wives, and The Try-Works.