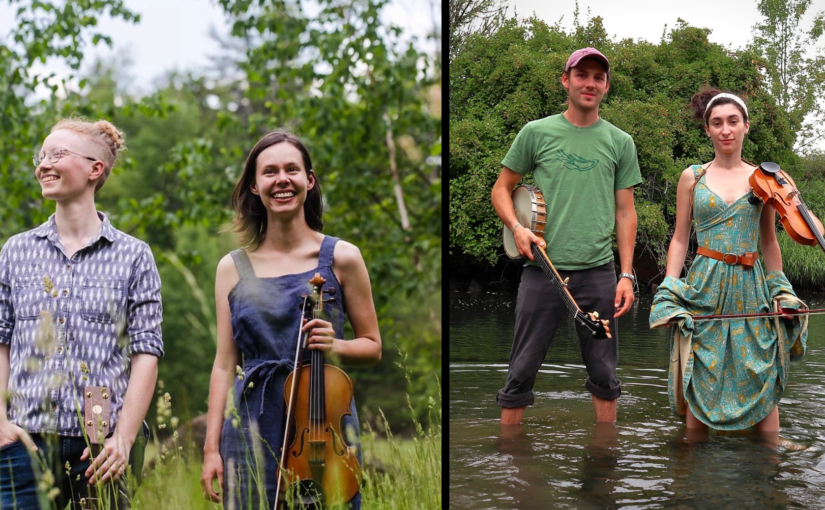 Casey Murray & Molly Tucker are a Boston-based folk duo. With Molly on fiddle and Casey on cello, guitar, and banjo, the two play original and traditional tunes in Celtic, New England, and Old Time styles. They spent the first few years of their duo writing tunes and songs from a distance while Casey attended Berklee College of Music and Molly attended Oberlin College and Conservatory. At the start of the pandemic, they graced the screens of virtual dances and performances across the country. They can more recently be found in dance halls, festivals, and listening rooms across New England, including Boston’s premiere folk venue Club Passim and Festival Trad Montréal, delighting audiences and dancers alike with their infectious energy and groove.  Casey and Molly released their debut album After the Sky Weeps in April 2022. We are very excited to welcome them to Seattle!

Dear Crow is a collaboration between Brian Lindsay and Penka Jane Culevski, sharing Old-time tunes with sweet double fiddles, tight vocal harmonies: a sound that is both nostalgic and bright with possibility.

Brian will be familiar to many from his duo Countercurrent (with Alex Sturbaum) and the contradance band One Dollar Whiskey with Alex and Penka Jane, among many other collaborations.
Brian Lindsay has been dancing since he could walk, singing since he could speak, and holding a fiddle to his chin for most of his life. Surrounded by both contra dance and Irish music and dance throughout his childhood, Brian spent much of his youth going to sessions in the NY area and studying with respected Irish fiddle player Brian Conway. An accomplished performer and Mid-Atlantic Irish Fiddle champion by the age of 17, Brian has also found the influences of many other musical styles and traditions make their way into his playing. Starting at a young age, other instruments started to enter his vocabulary, including the banjo, mandolin, guitar, and Irish tin whistle. Brian’s skill as a multi-instrumentalist extends especially to the voice. As an experienced performer of folk songs both new and old, Brian creates unique arrangements and thought provoking harmonies.

Penka Jane began playing fiddle as a child and has been singing since she first heard the radio. After discovering a love of traditional Irish music, Penka Jane found Old-time, Bluegrass, and Quebecois along the way. She began songwriting in earnest in 2018 and has been cultivating this new avenue of musical expression. In addition to Dear Crow, she performs in the Seattle and Olympia areas with the Choice Wives, and The Try-Works and One Dollar Whiskey.