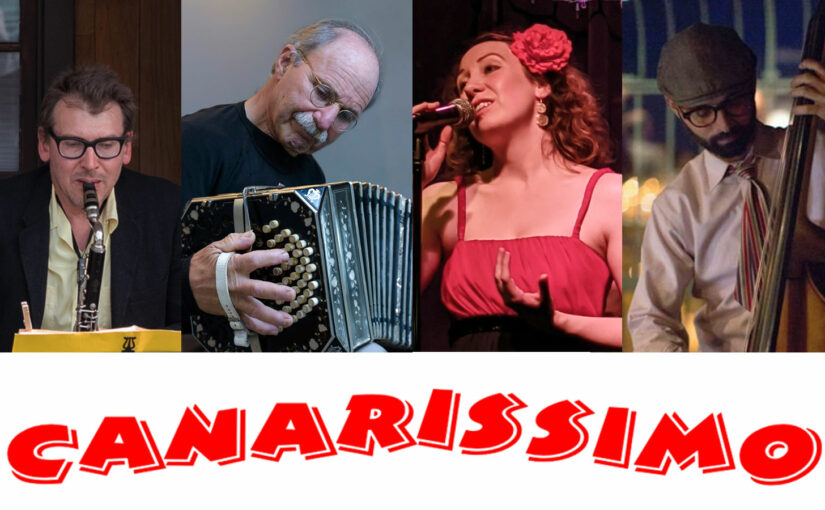 UPDATE – Tickets will be available at the door for tonight’s performance, though the online advance sales cut off at noon. Door prices are $24/$22 member, student, or senior/$10 Youth to age 17, payable by check or cash. (The in-person concert starts at 7:30pm, Saturday March 12th, lasting until approximately 10pm. The online concert will be available until Tuesday night March 15th. Once you begin viewing you will have 24 hours to complete viewing or rewatch the online concert.)

The Argentine bandoneon came to many people’s awareness through the work of Astor Piazzolla. We are fortunate to have leading bandoneon artist Bertram Levy here in the Pacific Northwest. Bertram has been immersed in classical and modern forms of Argentine tango for the last 30 years. During the years of pandemic isolation and from his deep understanding of the tradition’s history, Bertram conceived this project to highlight the connections it has to other vintage styles, notably the North American stride.

In the early 1920s the Buenos Aires tango orchestra of Francisco Canaro was king. In 1925 he took his tango orchestra to Paris and there he was exposed to other popular musics including American Jazz. Though in later years the Buenos Aires tango scene saw a dramatic evolution away from Canaro’s unique signature rhythm, his early recordings have endured as the most popular form among local dancers. Canaro’s early recordings clearly reflect the influence of the 1920s stride piano movement in the United States, as exemplified by Fats Waller, James P. Johnson, and Willie “The Lion” Smith. He even briefly formed his own Jazz orchestra. Bertram explores this connection in a fresh Northern American re-imagination of Canaro’s music in the style of the stride which he calls Stride Tango Americano.

His superb musicianship has led Bertram to explore many traditions. He has spent over 50 years spreading the Southern fiddle revival to generations of old time musicians. He is widely known for his unique “piedmont swing” banjo style, a crossover of bluegrass and old-time claw-hammer. He has also recorded the music of Henry Reed, and of Surry County with Kirk Sutphin. He is a powerful dance fiddler and author of several anglo concertina tutor books.

In Canarissimo, Bertram draws on his 12 years of bandoneon studies in Buenos Aires at the Conservatorio de Manuel de Falla and his role as the musical director of Seattle’s premier tango ensemble Tangoheart since 1999. He is joined by dazzling vocalist Robin Kallsen, star vintage clarinetist Jonathan Doyle and local favorite bassist Matt Weiner.

Robin‘s love for the music of the 1920’s and 30’s has made her a favored fixture of the Seattle vocal scene.  With her expressive 1920’s vocal style and theatrical presentation, she is a highlight at tango dances, in jazz clubs, and at Klezmer events throughout Puget Sound. Robin has studied the Bel Canto singing technique under voice teacher Marianne Weltmann and has the language skills to perform the music of many traditions.

Jonathan has had a career that has allowed him to perform professionally on the stage of the Grand Ole Opry, at Preservation Hall, on Austin City Limits TV show, at Jazz At Lincoln Center’s Midsummer Night’s Swing, and at numerous major festivals of jazz, blues, folk and world music. He played on and toured to support the grammy nominated album “Willie and the Wheel” with Willie Nelson and Asleep At The Wheel.

Inspired by “prebop”, Matt moves between slapping syncopated jazz on one tune, on another bowing a folksy melody. Matt can be spotted around Seattle performing with a long list of leading local musicians; he has also recorded with several of them. He was featured in 2019’s Christmas Revels in Cambridge, MA.  In Buddy: The Buddy Holly Story at the 5th Avenue Theatre, he played bassist Joe B. Mauldin . Centrum’s and Puget Sound Guitar Workshops among others have included Matt’s teaching.

Bertram Levy’s Canarissimo is a lively performance in a single 90-minute set with a narrative that you will want to hear all the way through.

This concert coming up March 12 will be presented both in person and online. Tickets are available for the live concert, livestream (with 72 hour viewing period), or a combo: In-person at Phinney advance tickets are $22 general; $20 student, senior, SFS, PNA; $10 youth to age 17. At the door, remaining tickets will be $2 more for adults ($24/$22/$10) payable by cash or check. Doors open at 7:00 pm. Tickets for online streaming access are $20/household general, discount need-based level or “super supporter” levels, or $5 add-on to the live show ticket for online access are also available.