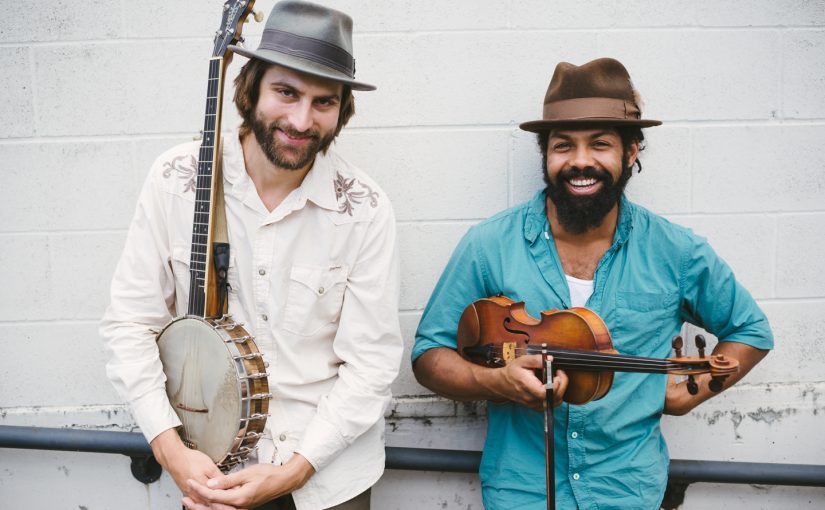 The history of American roots music in the early 20th century could never fit into an encyclopedia.  its too ramshackle, too rambunctious, too radical.  Fiddlers, guitarists, banjo players, and all kinds of folks rambled those early roads, learning from each other, inspiring each other, and pushing the music in new directions.  Music constantly switched back and forth across the racial divide, beholden only to the beat and the dance.  Its this fevered period of musical exchange that inspires Northwest roots music duo Ben Hunter & Joe Seamons.
Ben and Joe playing Banks of the River with Phil Wiggins

The songs on their new album, The North Wind & The Sun, tap into everything from Memphis Jug Band blues to work songs recorded in Southern prisons.  They also touch on an 1861 composition used to recruit black troops for the Civil war, an original adaptaton of old topical songs about corrupt clergymen, and an early jazz composition of Duke Ellington.  All of these traditions are tied together in the swirling musical whirlpool of pre-war American music. In January of 2016, the Washington Blues Society sent Ben and Joe to the 26th annual International Blues Challenge in Memphis, TN. There, they were awarded 1st placeout of 94 solo/duo acts representing 16 countriesfor their unique blend of pre-blues a cappella field hollers, fiddle & banjo breakdowns, and duet distillations of early jazz.

We are proud to be presenting this local duo in a Special SFS Sunday concert!