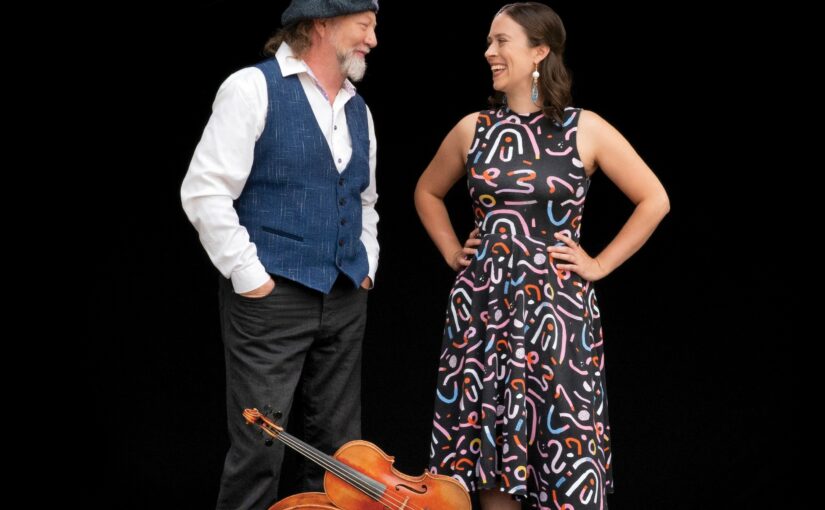 SFS is thrilled to welcome Alasdair Fraser and Natalie Haas to the SFS stage. Well-known to the Pacific Northwest from numerous concerts, the Festival of American Fiddle Tunes, the Bellingham Folk Fest and Whidbey Island workshops, Alasdair and Natalie are including Seattle on a road trip from California and up through Oregon and Washington.
Many of the young musicians in this area grew up going to Alasdair’s Sierra Fiddle Camp and Valley of Moon fiddle Camp in California during the summers. Some have even followed Alasdair and Natalie to fiddle camps on the Isle of Skye in Scotland and to Spain. What a following!

… you would think they’d been playing together for centuries. While his fiddle dances, her cello throbs darkly or plucks puckishly. Then [Haas] opens her cello’s throat, joining Fraser in soaring sustains, windswept refrains, and sudden, jazzy explosions. Their sound is as urbane as a Manhattan midnight, and as wild as a Clackmannan winter.
— Boston Globe

Watching and listening to Alasdair and Natalie in concert is a treat for the soul. Over the last 20 years of creating a buzz at festivals and concert halls across the world, they have truly set the standard for fiddle and cello in traditional music. They continue to thrill audiences internationally with their virtuosic playing, their near-telepathic understanding and the joyful spontaneity and sheer physical presence of their music.

As many gigs as they must have played together over the past decade or so, there remains a striking spontaneity about Fraser and Haas’s music-making. He has tonal variation and attack to spare, but what makes them so consistently absorbing is the responsiveness each shows to the other. Haas is more than a cellist: she’s the rhythm section who uses the percussive chip’n’chop of her bowing and the double bass-like pulse of her pizzicato playing to great effect. The accompanist&#39;s role moves so fluently between them, building tension all the while, and then they’ll slip into unison and it’s like
floodgates opening. — The Herald

Fraser has a concert and recording career spanning over 30 years, with a long list of awards, accolades, radio and television credits, and feature performances on top movie soundtracks (Last of the Mohicans, Titanic, etc.). In 2011, he was inducted into the Scottish Traditional Music Hall of Fame. Haas, a graduate of the Juilliard School of Music, is one of the most sought after cellists in traditional music today. She has performed and recorded with a who’s who of the fiddle world including Mark O’Connor, Natalie MacMaster, Irish supergroups Solas and Altan, Liz Carroll, Dirk Powell, Brittany Haas, Darol Anger, Jeremy Kittel, Hanneke Cassel, Laura Cortese, and many more.

The duo’s debut recording, Fire & Grace, won the coveted Scots Trad Music Album of the Year award, the Scottish equivalent of a Grammy. Since its release, the two have gone on to record five more critically acclaimed albums that blend a profound understanding of the Scottish tradition with cutting-edge string explorations.
We very much look forward to hearing Alasdair and Natalie live in concert and being immersed in the groove of their fantastic music. There will be no ‘boring bow’ in this concert! Come and be prepared to be blown away by the brilliance of Alasdair and Natalie making music together.
The concert will be one long set (80-90 minutes).
Doors open at 7pm for 7:30pm show.
Proof of vaccination and masks are required! Thank you for your understanding.
Online tickets will also be available if you are not able to attend the concert in person and will allow livestream viewing during the concert or watching at any time within the next 24 hours (Online tickets available for sale until 6:30 Sunday; plan to start your viewing by 7pm)
Alasdair and Natalie are excited to be back in Seattle. See you there!