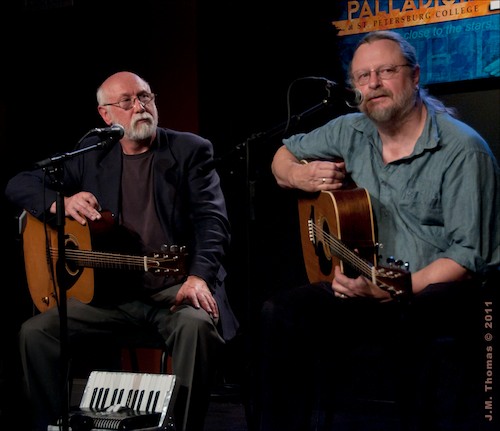 Special Sunday Show! – begins at 7:30 PM (doors open at 7)
Advance tickets available on-line until 12:30 day-of-show. There will be tickets available at the door – $20/$18/$9, payable by cash or check.
Alan Reid  (vocal, keyboard, guitar, piano accordion)
Alan was a vital member of Scotland’s legendary folk group Battlefield Band for 40 years. His groundbreaking keyboard work helped cement the band’s reputation as one of the most influential of its generation, while his songs steadily gained admirers. From beautiful ballads to a musical cycle on the life and times of Scots born sailor John Paul Jones Alan has forged a reputation for composing songs with beguiling melodies and strong historical content. He was nominated in the 2009 Scots Tradition Awards in the ‘Composer of the Year’ category. Alan has continued developing his song writing in his partnership with Rob. He has written songs for several drama pieces, one of which was featured in the National Theatre of Scotland’s 2014 powerful production ‘Glasgow Girls’. He has been a regular teacher of Scots song at the prestigious Swannanoa Gathering in North Carolina.
Rob van Sante (vocals, guitars, mandolin)
Rob was born in the Netherlands but has lived most of his life in England. His mother was a child prodigy pianist, so music was an important part of his early life – but Rob’s first love has always been the guitar.  From the 1970s onwards he toured extensively in Europe, North Africa and the Middle East, working with many of the stalwarts of the UK folk and jazz scene. In the early 90s he joined hte rank of The Battlefield Band as their ‘fifth’ member (sound engineer) and contiued in that role until 2010. Acknowledged for his subtle guitar accompaniments and fine harmony singing Rob is also a noted producer, recording engineer, and session musician.

Together Rob and Alan deliver an entertaining program featuring Alan’s well crafted songs and choice traditional selections.  Rob’s tasteful and driving guitar work (usually in his favoured DADGAD tuning) underpins Alan’s piano, accordion, and guitar while each complement the other’s lead vocals with strong harmonies. We look forward to hearing them in Seattle!