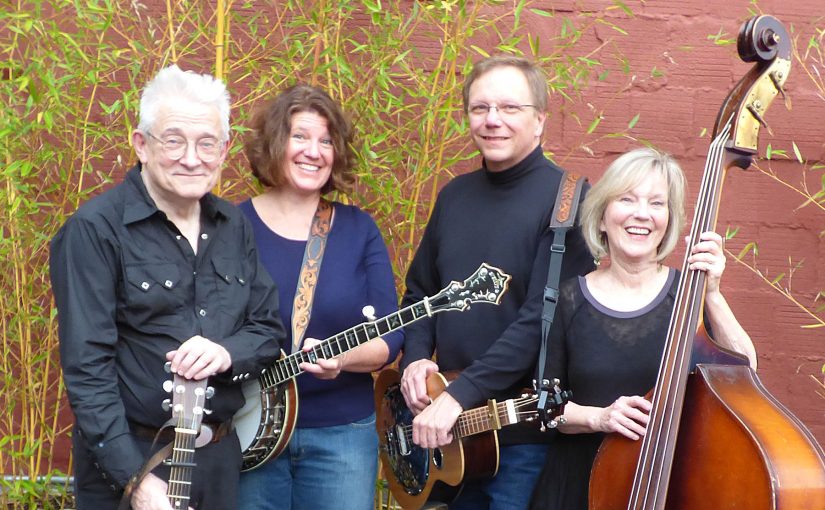 (Tickets will be available on-line at advance price until 12:00 noon the day of show, then will be available at the door, payable by cash or check)
3 Play Ricochet is a bluegrass band that knows no boundaries, or perhaps simply respects none. Their music spills over into country blues, ragtime, Appalachian old-time music, and cool jazz. They gleefully steal from Dave Brubeck, Joe Cocker, the Beatles, and Johnny Mercer, right along with Doc Watson, Earl Scruggs, Pete Seeger, and the Carter Family.
++++++++++++++
The band features four musicians from the four corners of America.
+ NE – Peter Langston grew up in New York City’s Greenwich Village where his parents were part of the New York theater and dance worlds. He is a multi-instrumentalist and has performed with artists as diverse as Mike Seeger, Reverend Gary Davis, Clark Terry, Doc Watson, and Chill Wills.
+ NW – Tina Webster grew up in Portland Oregon in a household where classical music and European folk music were part of her education. She studied banjo with Alan Munde, Alan O’Bryant, and Bill Keith and is a private pilot.
+ SW – Ron Haas grew up in Los Angeles where his parents had no interest at all in playing traditional music. Nonetheless, he has become a fine dobro player and luthier, building guitars, ukes, and dobros, including the dobro he plays on stage.
+ SE – Bonya McGarrity grew up in Memphis, TN where her father, Speck Rhodes, was the comedian and bassist in the Porter Wagoner band. Bonya was Elvis Presley’s first secretary at Graceland. She’s still playing her father’s upright bass.